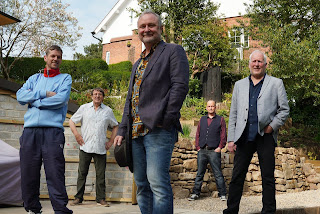 Wishing you all the best for the Festering Season. Here's a short blog about Scarborough Jazz.

It was difficult to imagine at the beginning of 2021 that there would be any high points to the year. How nice it is to be proved wrong.

The first high point for Scarborough Jazz had to be the restart of our club nights. Our opening gig was on 28th. July and featured Stuart McDonald with The MG3 (Mike Gordon, Tom Townsend and Bob Walker). We had no real idea what would happen when we opened the doors, so to see a room full of jazz lovers was a real delight.

11th. August saw the appearance of Stony Jazz (photo attached). Probably not a recognised name on the jazz circuit but a truly joyous night which really reminded everyone there how important music is to the players as well as the listening audience.

Scarborough Jazz Festival week saw the club host it's now traditional gig with Alan Barnes who, this year, was joined by the mighty Jim Corry. This two sax line up was accompanied by The MG3 for a night of exciting swing and the inevitable humour which is a feature of any gig with Alan. This proved to be a great start to what was, despite the pandemic, a wonderful Festival.

Our fourth high point? Difficult to pick a single event out. Let's just say the being back live is the biggest high point of all. MERRY CHRISTMAS AND A HAPPY NEW YEAR EVERYBODY.