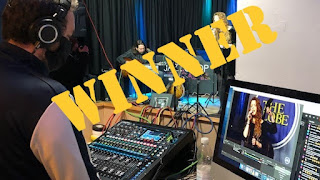 The determination of Newcastle’s Jazz.Coop to keep live music going during the pandemic has been rewarded with a national award. Following a public vote, it was declared the Small Community Co-op of the Year 2021. The Awards are organised by Co-operatives UK – the network for Britain’s thousands of co-operative businesses – and sponsored by The Co-operative Bank.

Dave Parker, co-chair of Jazz.Coop which owns The Globe music venue, said, “We’re delighted with this award because it recognises the vision, determination and hard work of members, volunteers and everyone else who helped keep us going during the pandemic, providing income for musicians, employment for staff, and joy for lovers of live music.

“Eight years ago, The Globe was a failing pub. Today it is an award-winning music venue and learning centre owned and run by a co-operative.

“It’s often been a struggle but we’ve succeeded by keeping people engaged. When lockdown started we invited our supporters to shape the future of The Globe and the response has been very positive – with donations, investments, volunteers, and loads of creative energy.

“We worked with musicians to develop livestreaming, and soon decided this was the way forward. The Globe was refurbished, and new equipment was installed by volunteers. We were fortunate in accessing funding from Power to Change and the Culture Recovery Fund.”

The Globe hosts jazz, folk, rock, classical and spoken word gigs that are enjoyed by small audiences in the venue and by more via livestream. It is set to hold a multi-genre festival on 23-25 July which is expected to be the first weekend after restrictions in England are lifted. The Globe also has a full programme of music courses, workshops and jam sessions ready to restart.

Rose Marley, CEO of Co-operatives UK said, “Huge congratulations to The Globe who have worked so hard … Rooted in their community, their members have a stake and a say, sharing in the co-op’s success, but also coming together when they are needed.  And because they are a co-op, these values are sustainable, they are not just a flash in the pan reaction to a crisis – their ethics form a core part of the organisation now and into the future.”

The Globe has been shortlisted for two other awards (The Parliamentary Jazz Award nomination was announced yesterday) and they are hoping for more good news by the end of July.

People can become members of the co-op and have a say in running The Globe by buying shares – see https://jazz.coop/join-us-membership-form/