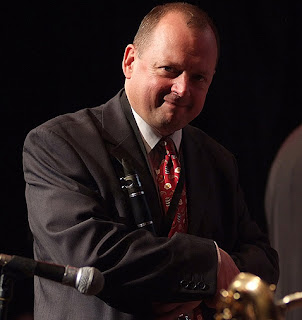 After so long without live music Sheffield Jazz is delighted to be returning with live jazz at Crookes Social Club with 4 gigs in a short summer season, constituting a veritable mini summer festival of jazz. The anti-Covid-19 precautions we are taking to protect the audience can be seen on our website www.sheffieldjazz.org.uk

The first gig on 4 June sees a return to Sheffield by guitarist Ant Law and his band, this time a quintet featuring Ivo Neame on piano. They will be performing music from their third album 'Life I Know' and their 2020 digital-only release ‘The Sleeper Wakes’, an album of infectious rhythmic hooks, lyrical flowing lines and progressive improvisation.

On 18 June we welcome back the versatile trumpeter Byron Wallen and his dazzling quartet Four Corners, which includes Sheffield Jazz favourite Rob Luft on guitar. The band was a great success on their last visit to Crookes in 2019 and was nominated for Jazz Ensemble of The Year in the 2020 Parliamentary Jazz Awards. They will feature music from Byron’s latest album ‘Portrait: Reflections on Belonging’ released last year to critical acclaim.

In contrast the gig on 25 June features piano virtuoso and composer Andrew McCormack, whose performances as part of Jean Toussaint’s Sheffield gigs in recent years were so impressive. Andrew, who has been the driving force behind A-list artists such as Kyle Eastwood, returns to play his own music and will play a split set - the first half alone, showcasing his latest album ‘Solo’ and the second with his trio.

Crookes Social Club is at Mulehouse Road, Sheffield S10 1TD. Full details are on our website www.sheffieldjazz.org.uk. All gigs are advance tickets only from www.ticketsource.co.uk/sheffield-jazz.

Posted by Steve Crocker at 09:15 No comments: 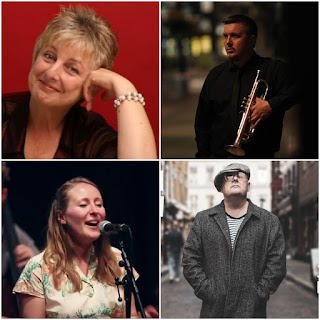 About Time – Malcolm Strachan Sextet  Thus May 20th 7.30pm @Seven Arts - live and online
His new album “About Time”  is a collection of original compositions, all written and arranged by him, and all  firmly rooted in the classic acoustic modern jazz style typified by the great 60’s and 70’s recordings on the legendary Blue Note Records label. Livestream link https://www.facebook.com/events/1201808570264693

Louise Gibbs sings Ellington and Strayhorn Sunday May 30th@Seven Arts 1.30pm We celebrate the music of Duke Ellington and Billy Strayhorn with the classics (and some forgotten masterpieces) that forged jazz: tickets https://www.ticketsource.co.uk/jazzleeds

Other news : Parliamentary Jazz Awards 2021
We'd like you to consider voting for the people that help make the JazzLeeds organisation what it is - particularly we think Dom Moore deserves a nomination for Jazz Educator of the Year. He really has been a great teacher for our Jazz leeds workshop students.and has continued to give online tutorials during lockdown.
To vote please go to: https://www.smartsurvey.co.uk/s/parliamentaryjazzawards2021/

New Venue for our workshops and jam sessions
I'm glad to say we have found a new place for our jazz workshops and jam sessions (and our acoustic piano) following the loss of Inkwell - who are not allowing outside users to hire the place from now on unfortunately although they are still continuing their own classes there. We'll miss them - they have been great. We've arranged instead to be the very wonderful Barn coffee shop at Meanwood Valley Urban Farm Sugar Well Rd, Meanwood, Leeds LS7 2QG

We'll be starting the instrumental workshop fortnightly from Monday 21 June, 7-9pm with Dom Moore. Our new jam session will be happening there monthly on Saturdays - first one on Saturday 4th July 3-5pm organised by Phil Green. Want to join ? Email us at  info@jazzleeds.org.uk.

JazzLeeds Reset Festival 17/18 July
There will be bands inside Seven Arts and courtyard groups playing outside. Events will be to be both live and live streamed. Headline acts will be Dennis Rollins (trombone) with Shri Sriram (electric bass and effects) and Nicola Farnon's Quartet feat Jim Corry (sax).  We've a welcome return from pannist Dudley Nesbit with Pan Jumby, vocalist Emily Brown, sax player Helen Pillinger Ysbryd and bassist (and one of our workshop leaders) Fergus Quill with his Trio featuring music from their new album. tTickets will go on sale from June 1st at www.ticketsource.co.uk/jazzleeds. don't miss out!

It is a busy summer of music ahead - watch our website for  all our July and August gigs!

Posted by Steve Crocker at 09:09 No comments: 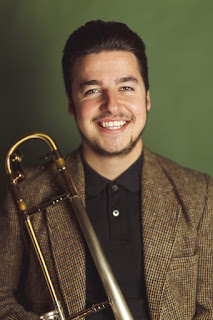 Wakefield Jazz are delighted to be putting on a brief season of gigs again! Starting on Friday 21st May with local trombone hero Rory Ingham in a quartet featuring vibes maestro Jonny Mansfield, and then on Friday 28th May with dynamic Sheffield singer/bassist Nicola Farnon, featuring Jim Corry on alto sax.

Covid restrictions still apply, so please book early via the website www.wakefieldjazz.org - after the success of our gigs in October during the last lockdown interregnum, we are looking forward enormously to enjoying some live jazz again.

Posted by Steve Crocker at 07:35 No comments: