Reflections on the past year - Southport Jazz 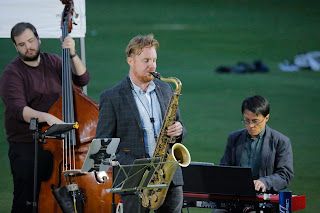 With the current restrictions on hospitality and performance venues it would be understandable to think that there has been virtually no live jazz performed since March. The amount of live music may have diminished but it hasn’t disappeared! Tom Sykes (Southport Jazz Club) has been able to perform a few times, including at a couple of outdoor jazz concerts at Sefton Park Cricket Club in Liverpool in September. He was playing piano with a quartet and quintet (which included Southport Jazz Club’s Mike Smith) and fortunately the rain held off long enough to finish the concerts, with the audience sitting on benches, socially distanced. Thanks to the organisers, Jazz on the Hill, audience members were able to book tickets in advance online and the events turned out to be a very pleasant way of spending a late summer evening.

Tom has also recently been appointed as Lecturer in Music Performance at Liverpool Hope University, where he has been able to run a small student ‘big band’. While the band is able to rehearse in Hope’s larger spaces using Perspex screens to separate horn players, it has been necessary to keep the band to a maximum of 14 musicians. There are students on the waiting list to join, and it is very heartening to know that young musicians are keen to play jazz and big band music. They are, after all, the musicians and audiences of the future, and they provide hope for the continuation and development of the music we love.