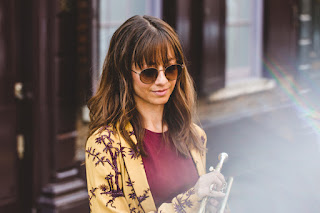 After a long season of Covid discontent, we are thrilled to finally invite you to join us for an emotional reunion of this incredible ensemble of 12 musicians led by Yazz Ahmed from her Hafla band- players from the album and friends- to perform this beautiful and highly immersive suite of music, from the main stage in Sage One Gateshead. The music is a celebration of female courage, determination and creativity and the album has had incredible reviews – this is truly a jazz star who goes from strength to strength.

yazzahmed.com
Yazz Ahmed is a British-Bahraini trumpet player and composer who seeks to blur the lines between jazz, electronic sound design, bringing together the sounds of her mixed heritage. Her music has been described as ‘psychedelic Arabic jazz, intoxicating and compelling‘.

In recent years she has led her various ensembles in concerts around the world as well as recording and performing with Radiohead, Lee Scratch Perry, Nile Rodgers, ABC, Swing Out Sister, Joan as Police Woman, Tarek Yamani, Amel Zen and These New Puritans. Yazz’s highly anticipated third album, Polyhymnia, was released in 2019 on Ropeadope Records and following a residency with our youth Jazz ensemble, Jambone, Yazz was due to play our Gateshead Jazz festival in March 2020.