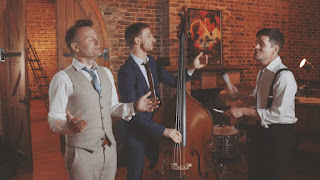 
As well as promoting the Southport Jazz Festival, the unstoppable Neil Hughes has a special jazz event coming up at the Cinammon Club - and he's writing a book!


Joe Stilgoe is an internationally acclaimed singer, pianist and songwriter. He has created a fresh sound for jazz in the 21st century, known for writing songs that feel like they've been around for years, and adapting classics that sound as though they were just written. Over the course of his varied career he has become a true modern-day entertainer, known globally as a performer of wit, style and a level of musicianship which has seen him recognised as one of the best singer-pianists in the world. Always searching for a new way of bringing not only his own songs but those he loves from the past to a new audience, he is an enticing mix of his heroes Danny Kaye, Nat King Cole and Dudley Moore.

Joe has toured around the world with his band and as a solo act, appearing in festivals, jazz clubs and concert halls from Ronnie Scott’s to The Barbican to Birdland in New York. As well as frequent guest performances he regularly puts together his own Big Band for sold-out shows across the country, and he is in demand as a soloist with the world’s finest orchestras including the RPO, John Wilson Orchestra and the BBC Concert Orchestra.


And for something completely different, my new book!


It's quite something to announce you are writing a book. So many doubts over the years, so many starts but no clean finish. I decided 2020 I would go all out and tell the world what I will be doing, a kind of spur to keep me on track if you like. If you wish to assuage my fears, jump on my fundraiser and you will be rewarded with a Limited Edition hard backed novel. It really is just like buying a copy in advance but with the knowledge that I will have less to worry about ! The Old Familiar Places is the story of a passage of time between the two funerals of Ruby and Freddie, 44 years apart. This is not a whimsical love story though it is tender. It has two heart stopping moments that shape and change lives and reminds us all about our human frailties. Love can win the day, but grief and loss spare no man. Two coming of age stories. One in the past and one in the present. You can Pre- order here.