The northern jazz scene is paricularly blessed with local and community radio jazz stations. Here we have four presenters for their three live jazz/improv highlights of the year.... 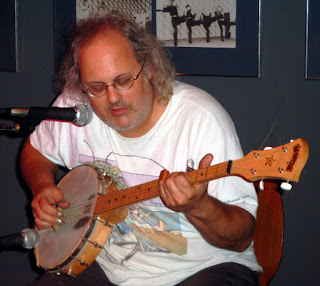 In January of 2019 I first heard, and was introduced to, Racoon Dog Soup at the Alt Shift J Festival at the Leeds College of Music. The quality of intimate improvisation coupled with the maturity of Emily Kent’s voice I found spellbinding and I have been lucky enough to feature them live at Chapel FM for “Left of Leeds” on a number of occasions since.

CHUNK on Meanwood Road was the venue for two other remarkable performances on the same night in April, Vipertime and HEV who both seem to encapsulate the raw Leeds DIY attitude to jazz and improvisation, and again, I have been lucky enough to feature HEV at Chapel FM.

In June we interviewed, and recorded an amazing set by, Eugene Chadbourne at the Fox and Newt on Burley Street in Leeds for Fusebox. This provided us with the opportunity to look inside the mind of one of the great improvisers and musical characters and witness the great man in action. I could go on, as Leeds is such an intoxicating environment for new jazz and improvisation and I feel we are blessed to be a part of it! 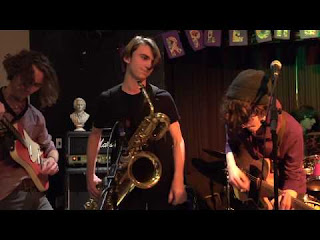 Purple Cheesecake
It's testament to the quality of jazz in the North of England that it's so hard to choose just three memorable moments, particularly when it has been such a great year in Scarborough alone, but I've focussed myself and chosen three local bands seen at northern venues.

The first was seeing John Settle's Vibeology on a family night out at 'JaTP jazz' in Bradford at the start of the year. We hadn't travelled over only for that gig, but it would have been worth the journey if we had - the atmosphere in the club was electric and the band cooked up an absolute storm from straight ahead swingers to meaty funk grooves. I've tried to catch them at every opportunity since such as at the Chapel Allerton Village Jazz Festival plus we booked them to play Scarborough Jazz club's 35th anniversary celebrations this summer too. I must get over to visit JaTP new venue at some point in 2020 - they have a great programme of music.

The best new music I heard was probably 'Rafe's Dilemma' which mixes storytelling, rock rhythms, free improvisation and electronica and yet remains totally accessible. When they played Scarborough jazz club some of the regulars left their usual table to sit right down the front for the second set and be immersed in the dynamic music and captivating singing - I've honestly never seen that happen before. There is just something about the performance that grabs you. They were equally brilliant when they played a set outdoors at Lancaster Jazz Festival a few weeks later. Do see them. Do buy the CD!

I hope you'll forgive my son being part of the final choice, but there's a bunch of really talented young musicians coming out of Scarborough - they're still in their mid teens but have already formed several jazz groups, organise their own gigs, some of them play in the local music centre big bands, they play alongside accomplished adult musicians as part of the hip-hop jazz jam we started this year in the town, and they just recorded a really professional sounding album of diverse music under the moniker of 'Purple Cheesecake' (https://open.spotify.com/track/4Jr8DxhYNtyFQj6tubU2Cc)
I've played some tracks on the radio show. it's so encouraging to see them get excited about jazz they hear (often stuff I haven't heard of!) and hear them create their own music. Their album launch last month was hugely impressive - 4+ hours of music to a club packed with young people! It might be a couple of years before you can catch them elsewhere in the region, but if there are similar young musicians like that all across the North of England then lovers of jazz have lots to be excited about. 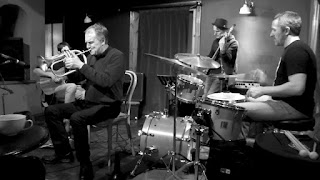 Ooooh, you are a “meanie”!! Only 3 ?? 😉😊😊. Alas the “day job”, JATP and BCB JazzScene have conspired to severely limit my jazz ventures “abroad” – well outside Bradford, but of those a memorable one for every good reason was Chris Ingham’s “The Jazz of Dudley Moore” at JazzLeeds@Seven Arts in March. Excellent narrative and glorious playing casting us back to those pre-Hollywood glory days and a reminder of just what a phenomenal pianist Dudley was, particularly poignant for one who was around when the first Derek & Clive LP was initially banned or very close to it. Lovely Gig. The JaTP standouts for me were :-

03 May 2019 : John Bailey Quartet What an absolute STUNNER this gig was!!, John Bailey : g; Richard Iles : flugel; Jack Chandler : sax; Pete Hughes : keys; John Sandham : b; Jonathan Hartley : d did Son of Bradford Allan Holdsworth (and quite a few other luminaries) PROUD as enthusiastically demonstrated by the appreciative JATPjazz audience, who are always the most accurate measure in such matters. A band well worth the seeing on a “pitch” many fear to tread.

05 April 2019 - Ben Crosland Quartet I'll not go into the reasons why this gig became such a challenge for the artists, suffice to say that Rod Mason had to cancel at very short notice and it was in divine hands as to whether Ben might make it. So imagine our surprise in the light of such upset to be met with a "hairdryer" treatment of the finest jazz, very rapidly re-arranged that very afternoon by Jez transferring "leads" to keyboard. Truly then, Leading groove cats, and did the audience purr. Definitely "keepers" are Jez Platt :p; Ben Crosland : b; Dave Tyas : d.

07 June 2019 - Andrzej Baranek Quintet Surely one of THE TOP gigs of JATPjazz near 20 year existence, what an utter thrill were the Andrzej Baranek Quintet. Maybe it was the broad spectrum of "era's" from which the pad sprang, or maybe it was the mind-boggling speed and virtuosity evident in every number or the way they tweaked and twisted them to their individual purpose with such consummate ease, making them their own ?? I think maybe the greatest indicator to me was how Kyran kept smiling and shaking his head in utter disbelief at both Andrzej's key "work" (actually high art) and Tony's truly blistering, ballistic runs and not a note dropped. The spontaneous three-way interchanges they did towards the end really put the cherry on the cake of what was one hum-dinger of a gig, and let us not forget Frank and Eryl for spontaneity and improvisation of this degree, simply can't exist without such a solid, reliable and responsive platform - THRILLING jazz from stem to stern !! Andrzej Baranek : p ; Kyran Matthews : sax ; Tony Ormesher : g ; Frank Grime : b ; Eryl Roberts : d 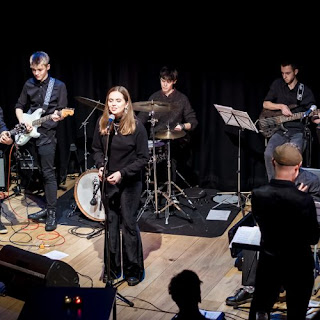 Chapel FM Collective
Passion OK for me - so here are three live events of the year with a lot of it!

George MacDonald Trio @Inkwell Leeds So easy to swing to, and left you wanting more - and more space to express that swing!

Our very own Chapel FM Jazz Collective (JazzLeeds Festival @Wardrobe). The energy, harmonics and raw enthusiasm powered that performance - part of a brilliant afternoon of younf Leeds bands. Dave Evans drives them like a demon - he's wee bit genius. When the audience are up and dancing you know you have them. Impressive!