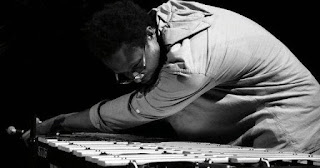 Pic of Corey @Seven_Arts Leeds cDenis Dalby
BBC has just announced it's Autumn Jazz schedules. Good to see @coreymwamba to front "Freeness" a showcase for cutting edge improvised music. Interesting too that Jools Holland is to feature young jazz acts. Very London biased programming though - the London Jazz Festival gets five mentions!
Here's the full press release:
The initiatives include swathes of BBC Radio 3 content including a six-hour overnight jazz takeover, a jazz collection on BBC Sounds, a partnership with Jazz FM which will see BBC Radio 3 and BBC Sounds broadcast Jazz FM content for the first time and Jazz FM to share key recordings from BBC Radio 3. There will also be a new jazz programme focussing on the emerging scene presented by composer and arranger Corey Mwamba, and high profile artist portraits on television including a seminal new feature documentary on Miles Davis by Stanley Nelson for BBC Two.

As part of the BBC’s commitment to showcasing the outer fringes of jazz, BBC Radio 3 will be launching a brand new programme, Freeness, a showcase for cutting edge improvised music in all its forms, linking the freedom-oriented roots of jazz to the vibrant underground scenes of the UK and beyond. The programme will be presented by Derby-based vibraphone player and composer Corey Mwamba and will appear on Saturday nights from November 2.

BBC Radio 3 will also be joining forces with Bauer Media for the first time in a unique partnership between commercial radio and public service. Shared content will appear on both BBC Radio 3 and BBC Sounds, and whilst the two stations have collaborated before with a digital pop-up BBC Music Jazz, this will be the first time BBC Radio 3 will be broadcasting content from Jazz FM on the network, with Jazz FM similarly sharing Radio 3 content from recorded concerts with their audiences in a reciprocal deal.

James Purnell, Director of Radio and Education, says: “As a jazz lover myself, I’m very proud of our track record in supporting the jazz scene and we are keen to ensure we are playing our part in its future too through a jazz collection on Sounds and a plethora of new programmes and partnerships. I’m delighted we’ll be working once again with our friends at Jazz FM, and their owner Bauer Media for the first time, to share content this EFG London Jazz festival, ensuring as many people as possible can discover great jazz programming.”

Nick Pitts at Jazz FM, says: “Jazz is all about collaboration and continually smashing boundaries, so it’s great for Jazz FM and BBC Radio 3 to be breaking new ground once again, working closely with each other coming together for the love of jazz to share this music with our audiences everywhere!”
Other upcoming jazz content includes Radio 3 broadcasts from the London Jazz Festival opening gala concert, Jazz Voice, and new for this year there will be a two hour J-Z event at RIBA hosted by Jumoké Fashola. Other content includes a Jazz Fix programme presented by Tina Edwards which will suggest a playlist for a public figure, encouraging them to fall in love with jazz for the first time.
A special six hour overnight show as part of BBC Radio 3’s London Jazz Festival programming, will see the station transform the late night schedule into a heady mix of jazz including the best concerts from around Europe, BBC music content linked to the London Jazz Festival and sessions from BBC Radio 3 New Generation Jazz Artists.

BBC Radio 2 will cover the London Jazz Festival through The Jamie Cullum Jazz Show, inviting a range of live jazz festival guests to perform on the programme. All of the BBC Radio content will appear on BBC Sounds and a dedicated jazz collection will be created in order to make the content easy to find and available on demand.

Meanwhile Head of BBC Music Television Commissioning, Jan Younghusband, confirmed that some of the UK’s emerging jazz artists will be reflected in the new run of Later... with Jools Holland on BBC Two. BBC Two and BBC Four will also schedule a number of high profile new television documentaries this autumn.

Highlights include a seminal programme on Miles Davis by Stanley Nelson with a London Jazz Festival screening on 16 November 2019. The programme features unseen archive and contributions from greats like Herbie Hancock, Quincy Jones and Wayne Shorter amongst others. There will also be a BBC Four film on Bluenote by Sophie Huber. Whilst for next year a Billie Holliday programme has been commissioned and it has also been confirmed that the final of BBC Young Jazz Musician on BBC Four is to be held at the London Jazz Festival in 2020.

Commenting on the television jazz commitment, Jan Younghusband, Head of BBC Music TV Commissioning says: “Jazz is a key part of the television music programming mix - we’re pleased to play a vital role in finding the talent of the future whilst also bringing new perspectives to musical legends through incredible access documentaries. Jazz lovers new and old are in for a treat.”