June Is Bustin' Out in Liverpool 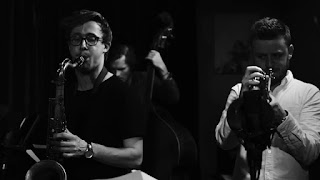 Alex Hitchcock  11 June
'June Is Bustin' Out All Over' goes the song! And there's certainly plenty happening this particular month (which by the way is named after the Roman Goddess Juno, wife of Jupiter, but of course you knew that already)!

It's the month with the longest daylight hours - hopefully most of them sun filled! And The Summer Solstice is not too far away.

It's also Caribbean Heritage month AND African-American Music month !
Which brings us to the subject of Jazz and our own in house programme of musical 'goodies'.

We can guarantee to put a 'Spring' in your Step and some 'Summer' in your Soul with our bumper bundle of Jazz delights.We kick off at the Jacaranda Club on the 4th and  we're very pleased to welcome Clube De Choro. Clube de Choro bring the vibrant form of Brazilian Choro music to the Liverpool music scene and are building a strong following and interest for this long forgotten music within the UK

They're followed at Phase One on the 11th of June by award-winning saxophonist Alex Hitchcock and his quintet. The quintet features five of the most creative rising stars of the UK's jazz scene.

On the 18th, Parrjazz presents Miguel Gorodi Nonet, made of up some of the UK's most sought-after jazz musicians. Including: Dave Hamblett (drums), Conor Chaplin (drums), Gareth Lockrane (flutes). We are also super excited to feature our first 'late show' starting at 11pm with local fusion legends The Blurred Sun Band

Which brings us to our Phase One June closer and we're going out with a bang! Mike Smith, his diverse and wide ranging experience have given him kudos amongst his peers and he has become one of the most sought after sax players in the area.

All Phase One events have free entry before 9pm then are £3 afterwards with a chance to win a vinyl of your choice. NUS card holders get free entry.