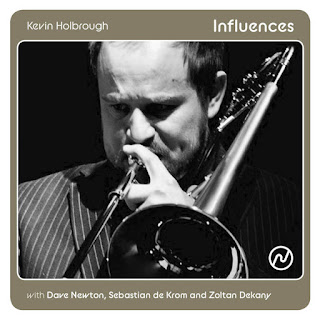 The recording pays homage to the greats, with a mixture of original compositions, arrangements from the great American Songbook and the music of JJ Johnson whose melodic improvisation and tone quality have been a constant influence on Kevins playing. Alongside his professional playing career Kevin is currently a senior lecturer of jazz trombone at Leeds College of Music and a Michael Rath artist.

Within the jazz field Kevin is noted for his unique style, sound and creativity, a professional  trombonist of over twenty years with an ever expanding CV both in the jazz and commercial field he has performed and toured at theatres, festivals and jazz festivals throughout Europe and the UK with numerous shows, sessions, groups and artists such as The Mingus Big Band, Dennis Rollins, Gordon Goodwin, Eric Marienthal, John Labarbera, Mark Nightingale and many more.

Hear the band and download the album here https://newjazzrecords.bandcamp.com/album/influences

“It has been an absolute honour to play and record an album with incredible musicians, Dave Newton who has been massive source of inspiration for me and is one of the finest jazz pianists in the UK”