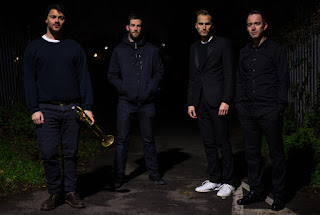 The month of March began with a bang. The 16th Great North Big Band Jazz Festival staged at Park View Community Centre in Chester le Street over three days (Mar 1-3) is one of the jazz world's great - yet little known - success stories. Festival director Bill Watson has established the competition event to such an extent that no fewer than thirty two big bands vied for a National Glass Centre-commissioned trophy. Friday evening (Mar 1) was devoted to a concert performamce by Musicians Unlimited and a specially assembled Festival Band. The competition proper began on Saturday and from there on iit was a non-stop big band bonanza through to Sunday evening. Senior bands (many of them university outfits), schools and youth jazz orchestras - a feast for big band fans.

Sunday 3 March at Sage Gateshead presents a dilemma - in Sage One it's the hugely popular Postmodern Jukebox and in Sage Two Laura Jurd introduces a multi bill including her own band Dinosaur and the Ligeti Quartet.

Hard bop comes to Darlington's Opus 4 Jazz Club in the shape of Alter Ego (Mar 8), the Pasadena Roof Orchestra (with several familiar faces in the line-up) will be in concert at the Customs House, South Shields (Mar 28) and the Customs House Big Band itself heads to the Newcastle Jazz Co-op with Ruth Lambert fronting the band on March 31.

The legendary River City Jazzmen called it a day some time ago. Now, the name lives on with the formation of the River City Hot Four. Three of the four musicians were members of the aforementioned New Orleans outfit including trombonist Gordon 'Solly' Solomon (the man who, it is said, gave Gordon Sumner his nickname during their time together in the Newcastle Big Band...Mr Sumner aka Sting). Catch the quartet at the Beresford Arms near Morpeth on Monday 4th.

Blaydon Jazz Club is fast approaching its 35th anniversary and to kick-off the 2019 programme there is a triple bill fundraising gig on Sunday 17th. Beginning at 7:00pm with the Early Bird Band (alumni include Francis Tulip and Matt McKellar), the Alice Grace Quartet follows with the Noel Dennis Quartet closing the evening. £10 on the door, do get along and show your support.

Jazz Record Requests is to be broadcast live from Sage Gateshead on Saturday 30. Alyn Shipton invites listeners to pop along, sit on the concourse and marvel at the mechanics of a live on-air programme. Jo Harrop and Paul Edis will perform live alongside Shipton, it all starts at 4:00pm, no ticket required.

Finally, if you can get to just one gig this month, then this is the one...the Mick Shoulder Quintet at Bishop Auckland Town Hall, March 15 (1:00pm). A Jazz Messengers-plus outfit, on tenor sax is the rarely heard Lewis Watson. Pull a sicky, bunk off school, one word describes this gig...'unmissable'.