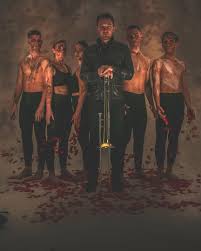 A new album launch concert, a festival launch evening, a brass masterclass, a two-day live CD recording session, not one but two theatrical comedies, not one but two dance companies, jam sessions, workshops, oh, and the little matter of International Jazz Day - these just some of the events to get along to during April.

The Ushaw Enseme's new album launch (Thurs 4) is at what could be described as the band's spiritual home. Formerly a seminary, Ushaw, a couple of miles from Durham, is the setting for the unveiling of Paul Edis' new work. Tickets are likely to go like seasonal hot cross buns so don't delay, book now - 0191 334 5119.

In the middle of the month pianist Paul Edis links up with Triptych colleagues Paul Susans, bass, and percussionist Rob Walker to record an album over two nights (Tues 16 & Wed 17) at Blank Studios in Newcastle. The good news is you can go along and be part of the occasion (admission £8).

DJazz: Durham City Jazz Festival (June 7-9) has emerged as a major asset on the local scene and a tidal wave of publicity begins with a launch event at the Courtyard Cafe in Palace Green Library in the shadow of Durham Cathedral (Thurs 18). A fiver admission, a set from Hand to Mouth (Lindsay Hannon and Bradley Johnston) and all the info you could possibly want for the three-day summer festival - support your local jazz festival!

Fancy a laugh? Crooners is the laugh-a-minute theatre show created by dyed-in-the-wool jazz musicians (the Hibbards are on board) and veteran theatrical hoofers. The production has toured provincial venues up and down the land and its latest stop in the region is at Billingham's Forum Theatre (Fri 12). The successful Radio 4 comedy series The Horne Section takes to the road from time to time and on Wed 24 Alex Horne and his A-list jazz band tread the boards at Newcastle's Theatre Royal.

Dance is big business and this month two very different shows - one commemorating the sacrifice of WWI, the other celebrating the 50th anniversary of the recording of an iconic album - come to the region. Eliot Smith Dance 'Triple Bill' includes trombonist Jason Holcomb's commissioned piece 'Poppy'. There will be two performances of the thought-provoking piece (Sat 13 & Sun 14) at Gosforth Civic Theatre. In marked contrast be sure to catch one of only two performances at Newcastle Theatre Royal (Fri 26 & Sat 27) of Pepperland by the Mark Morris Dance Group. The Beatles' Sgt. Pepper album is fifty! To celebrate the milestone Mark Morris' company is touring Britain and what's more Ethan Iverson is the on-stage MD of a NYC-based seven-piece band!

Finally, at the end of the month (Sat 27, 3:00pm) trumpet virtuoso Mike Lovatt conducts a (free admission!) brass masterclass at Elvet Church in the heart of Durham City followed by an evening concert as guest soloist with Fishburn Brass Band. On the last day of the month (Tues 30) it just happens to be International Jazz Day and, good for them, the Newcastle Jazz Co-op is putting on a free admission party featuring a slew of regional bands.