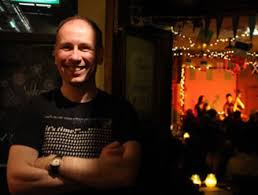 2018 seems to have passed in a flash. Counting up, we ran 56 gigs at 5 venues around Sheffield, and so its very difficult to pick out a best 3; so here’s a load more! I could have chose any number from across the year for all sorts of different reasons.

The year started with a sellout gig for Manchester’s Beats & Pieces Big Band on their 10th anniversary tour, at Yellow Arch studios. What a night that was; they so connected with the audience, a true experience for everyone at a brilliant venue. I was blown away by the arrangements, and how the band’s music has developed over those years.

Two bands with overlapping line-ups brought us their utterly distinctive and original music in the first half of the year; the Elliot Galvin Trio and Dinosaur both prompted big queues to get in, mixing jazz with synths, electronics (and in Elliot’s case hacked toy instruments), all from their new albums on Edition Records, a label which has really gone to the next level this year.

Formerly based in Sheffield, drummer Johnny Hunter astonished us with his original music for sax, string quartet, and drums, Pale Blue Dot. Ambitious, perfectly balanced and full of stillness; a reflective and beautiful antidote to the world outside the Lescar backroom, and a great reason for why we run these nights. Improvisation and string quartets in a pub. Perfect.

Birmingham-based drummer Jim Bashford brought a quartet featuring Trish Clowes and Percy Purceglove to The Lescar, playing classic Thelonious Monk tunes. The room was so rammed I had to stand on a chair at the back to watch the band over the audience. The connection between the frontline players and the playing by the whole band was sublime.

The Johnny Mansfield Elftet landed at The Lescar in September. 11 amazing musicians charmed another full room with their original music, alive with youthful positive energy and optimism. There seems to be a continuous flow of brilliant young musicians emerging on the UK scene, exemplified by this  band.

During October four talented and very different young bands, the Samantha Wright Quintet, Morpher, Josh Schofield Quartet, and the Bela Horvath Trio, toured to venues in Nottingham, London, Lyme Regis, Sheffield, and Birmingham, to enthusiastic audiences, and really demonstrating the amazing pipeline of music talent emerging around the country. I was involved in managing the tours, alongside Birmingham-based promoter Tony Dudley-Evans, and it was such a buzz to see their music develop and the responses of the audiences.

Finally in the space of 4 days, we put on the band that Hannah Brady (my Jazz at The Lescar co-conspirator) and I play in, Foxhat, at the atmospheric Holt Cafe, alongside three bands all featuring the students that have been working with us to put on the music at The Lescar; the Cesca Grace Quartet, the Kate Griffin Trio, and Life Aquatic Band, mixing jazz, fusion, folk and indie psychedelia, the best fun, and so good to see our young colleagues playing their own amazing music. Watch out for them all! A few days later four of us went down to London and were awarded UK jazz promoter of the year at the Parliamentary Jazz Awards. Words can’t express what this meant to me personally, and to the team around me. Its an immense privilege to feel part of this scene, and I was as proud as I’ll ever be.