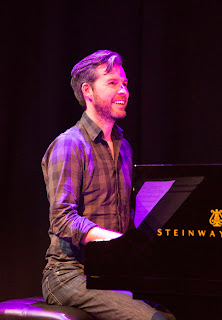 On Friday 1 February at 20.00 we welcome Byron Wallen’s Four Corners. Byron (“one of the most innovative, exciting and original trumpet players alive”…Jazzwise Magazine) brings to Sheffield his dazzling 'Four Corners' band including guitarist Rob Luft Byron is widely recognised as a seminal figure in world jazz, and he has played alongside legendary musicians such as Andrew Hill, George Benson, Jack DeJohnette and King Sunny Ade.

The Duncan Eagles Quartet will be appearing on Friday 8 February at 20.00. Duncan “is fast becoming one of the most exciting players emerging on the UK jazz scene" (Jazzwise) and comes to Sheffield as part of a UK tour to promote his debut album 'Citizen', which follows a string of highly praised releases with UK group Partikel

On Friday 15 February at 20.00 Two of a Mind, led by Chris Briscoe and Allison Neale,will explore afresh the freewheeling, wonderfully melodic interpretations by Gerry Mulligan and Paul Desmond on Blues in Time and Two of a Mind, Arrangements drawn from the original Desmond/Mulligan records are featured as well as their arrangements of other standards and new standards- based compositions by Chris Biscoe.

And on Thursday 28 February at 19.30 we move to the University of Sheffield’s Firth Hall, when Gwilym Simcock will be playing solo piano.  Gwilym Simcock has carved out a career as one of the most gifted pianists and imaginative composers on the European scene. He moves effortlessly between jazz and classical music with wide-ranging influences, from jazz legends Keith Jarrett, Chick Corea, Jaco Pastorius and Pat Metheny, to classical composers including Ravel, Dutilleux, Bartók and Turnage.

All Sheffield Jazz gigs, except the Gwilym Simcock concert, will be at Crookes Social Club, Mulehouse Road, Sheffield S10 1TD,

Further details of the complete Sheffield Jazz programme can be found at www,sheffieldjazz.org.uk
.