Paul Bream from Jazz North East with his "three" favourites from 2018! (Ed)

There’s a novel by B S Johnson, ‘The Unfortunates’, which consists of 27 sections that can be shuf-fled and read in any order. Looking back at the many tremendous gigs I’ve attended in 2018, and faced with the ludicrous task of identifying my ‘favourites’ from such a cornucopia of riches, I’m inclined to take a leaf (or several leaves) out of Johnson’s book, submitting a score or more of re-views and leaving the reader to select at random. The novel’s title, however, wouldn’t apply - on the contrary, having heard so much great music, I consider myself ‘The Fortunate’.

[Editor’s comment: “Stop being so self-indulgent. I make the rules here, and I’m even bending those to allow you five choices.”
Author’s response: “If you’re going to be authoritarian about it, I’ll treat it like a Jazz North East raffle, put all the possibles in a hat, and pluck out five - at least I know that every one will be a win-ner.”]

So, what does the process give me? 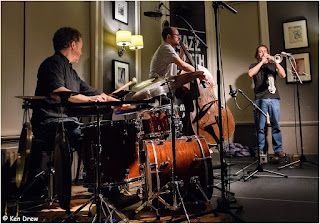 Luís Vicente, Olie Brice & Mark Sanders - One of those wonderful occasions when three musi-cians come together for the first time and immediately find a common language of the highest im-aginative creativity. For Portuguese trumpeter Vicente this was his first ever UK gig, and he’d never previously played with either Brice or Sanders, but the rapport was tremendous, delivering music that was completely free yet shot through with spontaneous melodicism.

Daniel Levin - a solo set of riveting intensity from New York cellist Levin, displaying a virtuosic command of his instrument, and employing a range of extended techniques that served not as ends in themselves (such parlour tricks are sadly not uncommon in improv circles) but as totally integrat-ed means to express his musical vision. At the end of the evening he joined the trio of Graeme Wil-son, Andy Champion and Stu Brown, lifting their performance too into a higher dimension.

Joe McPhee, John Pope & Paul Hession - another one-off meeting that worked a treat. Free jazz veteran McPhee last played with drummer Paul Hession 15 years ago, and had never even heard of bassist John Pope until the previous evening. Their pre-gig rehearsal apparently consisted of Joe saying “Let’s get out there and make some noise”, and that’s exactly what they did - but what a glo-rious, uplifting noise it was, careering joyously across the spectrum from spirituals to Albert Ayler, with all three participants finding opportunities to nudge the music in different directions. McPhee will be 80 next year, but his thirst for new challenges is undiminished (playing part of this gig on a plastic trumpet is all part of the process!).

Velvet Revolution - I’d heard this trio of German saxophonist Daniel Erdmann, French violinist Théo Ceccaldi, and UK vibes maestro Jim Hart at a 2017 festival in Holland and been blown away, so had been salivating for weeks before they made their Newcastle debut. It proved even more memorable than expected; flight problems meant that Théo didn’t get to the venue until nearly 11.00pm, so Daniel and Jim offered a full set as a duo before ‘normal service’ was resumed and the trio played on to midnight! It was fascinating to hear how the absence of the violin affected not just the dynamics but also the melodic inclinations of the music, so this was like hearing two entirely different (and equally brilliant) bands interpreting common material. 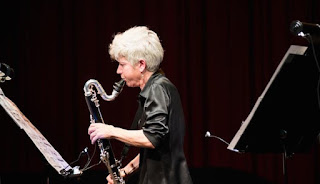 Lori Freedman, George Burt & Corey Mwamba - Canadian clarinet player Lori Freedman originally met George Burt and Corey Mwamba a year ago when she guested with the Glasgow Impro-visers Orchestra, but this was their first outing as a trio. In fact the gig started with a short solo piece from Lori, incorporating an astonishing array of vocalisations and deconstructed sound generation from the bass clarinet, after which George and Corey entered into the spirit of the moment with whoops and hollers before adding their own utterly distinctive approaches on guitar and vibes. In a year which has been marked by some memorable international collaborations, this was an en-thralling climax.

[Editor’s comment: “There, that wasn’t so difficult, was it?”
Author’s response: “No, but I’m unilaterally bending the rules to mention a handful of also-rans.”]