2018 has been such a good year for 5* gigs that to select just three is like being asked to name the three best of anything. However, here goes! 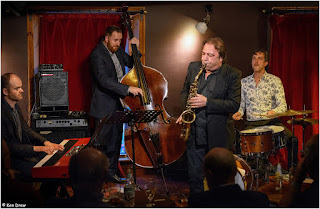 Greg Abate w. Paul Edis Trio – Jazz Café, Newcastle (picture Ken Drew)
The 2018 DownBeat Critics Poll had Greg placed third in the ‘Rising Star Alto Sax’ category. How bizarre is that for a 70-year-old who has been delighting audiences throughout the world for many years? Greg’s session with Paul Edis (they’d played a duo set earlier in Durham) was but the latest of many gigs he’s played, over the years, in the northeast. This one ticked all the boxes from the previous ones and maybe a couple more.

Mingus Big Band – Middlesbrough Town Hall.
To hear an American big band just down/up the road from you these days is quite something. In my younger days, Basie, Ellington, Herman, Kenton and others were regular visitors to Newcastle’s City Hall.   In retrospect, I can’t believe how naïve we were in thinking this would last forever but, tempus fugit, they, the musicians, died and we, the listeners, grew older.
Fast forward to Middlesbrough Town Hall and a Sunday evening concert in the refurbished civic auditorium – I’d previously heard Kenton there – and the years tumbled away. A big band that took the work of Mingus, not as a tribute band but a band that brought his vast legacy into the present day. I’d heard the band a couple of days previous at Ronnie’s and this rubber-stamped that earlier concert. Wow!

Mick Shoulder Quintet – Black Bull, Blaydon.
For reasons unknown, sightings of Lewis Watson playing a jazz gig are about as rare as a duck-billed platypus turning up on your bird table. However, on one magical night at Blaydon Jazz club, bassist Mick Shoulder put together a hard-hitting bebop band that let those present realise that they were in the presence of perhaps the greatest unsung tenor-player ever to play there (or anywhere come to that!). He blew up a storm and trumpet player Graham Hardy and the backroom boys, Shoulder, Edis and Russ Morgan, were with him every step of the way. On Bebop Spoken Here, I referred to it as The Quintet of the Year – decision stands.

I could have listed many many more but, alas, Jo Harrup at Ushaw Jazz Festival and Alison Rayner Quintet at the Globe are but two of the concerts that I have reluctantly had to leave out, but, maybe if you ask me again tomorrow, they will be in!
Lance.
Lance Liddle
Bebop Spoken Here