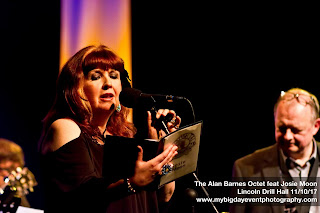 Following the outstanding success of the Fish Tales tour, CD and publication, we have an exciting and ambitious new project for 2019. Bringing together the creative imagination of poet Josie Moon and the dynamic composition talents of Alan Barnes and Pat McCarthy along with a stellar line-up of international artists; Dave Green, Gilad Atzmon, Mark Nightingale, Sebastiaan De Krom, Dean Masser and Neil Yates, A Requiem is a bold and challenging work that examines the impact of conflict on individuals across a century, beginning in the trenches and ending in a robust call for peace in our time.

The work honours those who have fought, died and made huge personal sacrifices while also asking important questions about the very nature of warfare. Daring and audacious in style and structure, A Requiem is a moving but ultimately uplifting and soulful work which invites the audience to both remember the history of conflict and resolve to do better in the future. Tour dates and the new CD release will be announced in 2019.

There is also an aspect which will be of  interest to schools - the Arts Council funding also includes funding for a children's project: A Soldier Through Time: schools will have the opportunity to engage in a workshop in which they will learn six original songs and use drama and storytelling techniques to explore the themes.  The children will also have an opportunity to take part in a Singing Festival performance day. A Soldier Through Time will give children a chance to think about war from the perspective of a soldier who exists inside and outside conflict, as the soldier will be a time traveller commenting on war past and present. With match funding from individual music HUBs, (MEH's) this could be available as a workshop, CPD, including a story book with words and music.