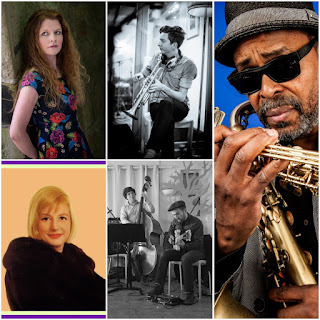 Well we all know about Mo-vember, let's make this month J-ovember! Your month for live jazz in Leeds with Jean Toussaint, Freddie Gavita, Eirik Svela's Anglo Norwegian Quartet, Zoe Gilby, Jenny Hammond sings Blosson Dearie - and our Jazz Jam session.  It may be getting cold and dark outside but inside our music is warm and bright .......

November Jazz Jam
Sunday afternoon 4 November @Inkwell Leeds £7/5 1.30-4pm
And why wouldn't you start with a Jam! We pride ourselves at JazzLeeds at having the friendliest jam session in Leeds. No elbows out, or cutting contests, we welcome all people of all standards who just want to come along and play. 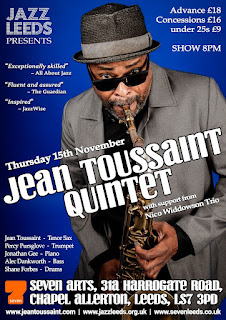 Jean Toussaint Quintet – Brother Raymond
Thursday 15 November @Seven Arts 8pm-11pm Doors 7.30pm
Tickets £18 full price £16 concessions £9 (half price) for NUS and under 25’s.
Jean Toussaint - Tenor Sax Percy Pursglove - Trumpet Jonathan Gee - Piano Alec Dankworth - Bass Shane Forbes - Drums
The return to Leeds of a very special band led by a former Jazz Messenger. Grammy-winning saxophonist Jean Toussaint who first came to prominence when he joined Art Blakey’s Jazz Messengers in 1982. Since moving to London in 1987, Toussaint has released ten critically-acclaimed CDs as a leader. Tonight he presents his 11th album, Brother Raymond, as part of a UK tour with a truly all-star quintet. The music of “Brother Raymond” builds on the legacy of Art Blakey but above all confirms Toussaint’s place as an accomplished composer at the forefront of modern jazz.

“Eirik Svela Anglo-Norwegian Ensemble
Sunday afternoon 25 November @Seven Arts 1.30pm start
£10/8 conc £5 for under 25's, kids under 16 free
Eirik Svela – Guitar, Jamil Sheriff – piano, Andrew Robb – bass Magnus Sefaniassen Eide – drums
Norwegian jazz guitarist Eirik Svela is establishing himself as an important voice amongst a new generation of Scandinavian jazz musicians. In March 2018 he recorded his debut album in New York with the internationally acclaimed organ player Sam Yahel (Joshua Redman, Norah Jones) and in November he is touring in England with his group.  Eirik Svela is an alumnus of Leeds College of Music, and appeared at Seven Arts many times whilst here as a student. His group has grown out of the environment around the Norwegian Academy of Music. 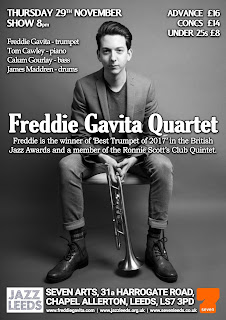 Freddie Gavita Quartet
@Seven Arts Thursday evening 29 November 8pm £16/14 NUS/Under 25's £8 (half price)
Freddie Gavita trumpet Tom Cawley (piano) Calum Gourlay (bass) James Maddren (drums)
Winner of the British Jazz Awards “Best Trumpet of 2017,” Freddie has cemented his place as a leading light on the British Jazz scene. With the release of his debut album “Transient” in April 2017, his star is certainly on the rise. He is a member of the Ronnie Scott’s Club Quintet and jazz-rock outfit Fletch’s Brew as well as being a band leader in his own right. A fearless improviser, “he solos with fluent authority, his tone ranging from the warmly conversational to the eloquently strident.”