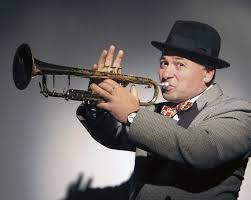 On July the 21st the Dove Jazz Club is greatly looking forward to presenting a band featuring the British Jazz Award winning trumpeter Enrico Tomasso and other musicians of a similar ilk. Enrico is an extremely popular figure on today’s jazz scene who possesses an exciting stage presence as well as a lively and infectious personality. He is widely admired for his versatility along with his ability to lay down a firm, incisive lead. It is always a rewarding pleasure for the Club to be able to include Paul Munnery and his trombone in one of our Saturday night line ups being noted as he is for his forthright and fiery delivery, he is always able to turn out a soulful ballad or blues when called upon to do so. The much in demand reeds man John Hallam who is no stranger to the Dove stage completes the front line. In an illustrious career this fluent and supremely sensitive performer has played with a great number of the finest musicians from both sides of the Atlantic.

The band possesses a formidable rhythm section powered by the superb drumming of the vastly experienced Nick Ward who laid down the rhythm with his first band in the early 80’s. The always distinguished looking Richard Vernon who plied his trade on string bass for many a year in the late, never to be forgotten ’Thomas Jefferson Burton’s Sporting House Quartet’ one who is still able to relate a ripping yarn or two from those days of prurience with the Master. Tom Langham will also feature in this compendious array on banjo and guitar and no doubt rendering the odd vocal. It affords him a rare opportunity to relive his formative years as a very young New Orleans style banjoist with the Hot Spa Stompers in fashionable Buxton. On paper we have a line up to die for and one we are sure will not disappoint along with our real ale that will be a most gratifying barrel of Speckled Hen.

We are having a month off in August returning on September 15th with T.J. Johnson’s Band.