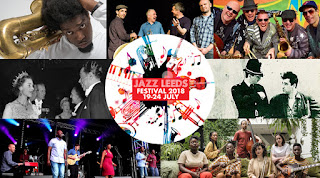 The winner will be drawn out of a hat live on stage at the End of Year Show this Thursday 28th June at Leeds College of Music at around 4.30pm (tickets for that event are here https://www.lcm.ac.uk/whats-on/end-of-year-show-2018/.)

Posted by Steve Crocker at 07:18 No comments: 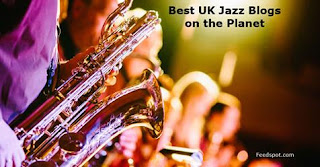 Here's a surprise - we're number 5 in the UK jazz blogs - we beat the Guardian!

Thanks for all your support in providing the information over the past five years folks - keep em coming, must be doing some good...

Glad to report also that Lance Liddle's Bebop Spoken Hear blog based in Newcastle was number 3 in the same chart!

Posted by Steve Crocker at 07:02 No comments: 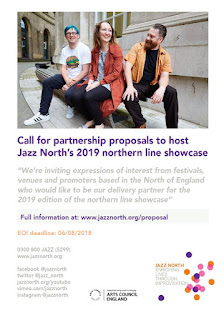 Jazz North are now inviting EOI from any northern festivals, promoters or venues who would be interested in hosting the 2019 northern line showcase. Anyone up for it?

Posted by Steve Crocker at 03:21 No comments:

All that Jazz in a Spiegeltent 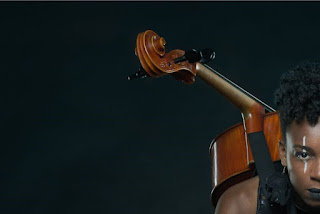 Guest curator of the Spiegeltent is the MOBO-nominated singer-songwriter Ayanna Witter-Johnson, who’ll also be performing a world premiere of a special commission. Alongside jazz, the classical-trained cellist touches on soul, blues and reggae influences.

One of the ground-breaking jazz acts she’s bringing to Harrogate is Binker & Moses. Ayanna said: “I love their raw energy and spontaneity!” The semi-free jazz drum-and-sax duo and MOBO winners, have been hailed as part of a new type of jazz in the UK, creating sounds that work on dance floors and festivals as well as jazz clubs.

Winner of the Kenny Wheeler jazz prize, Misha Mullov-Abbado, has performed at Ronnie Scott’s and the 606 Club. The 2017 BBC Radio 3 New Generation Artist’s debut album was picked as one of the Telegraph’s Best Jazz Albums of 2015.  His second album, Cross-Platform Interchange wowed the critics.

Posted by Steve Crocker at 04:24 No comments: 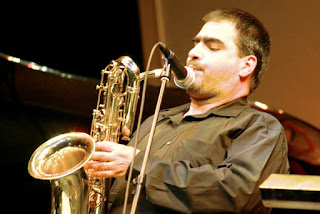 Iconic saxophonist, flautist, composer, arranger, bandleader, educator, Andy Panayi has graced the UK jazz scene for many years. He is currently Instructor in Jazz Flute at the Royal College of Music and of Saxophone at the Birmingham Conservatory.

Posted by Steve Crocker at 04:14 No comments:

Voting is now open for the prestigious 2018 (APPJAG) Parliamentary Jazz Awards. The North has done well recently in the Jazz Venue of the Year, winning in the last two years. Let's see if we can make it three!

The first round is by public nomination for the categories. The 2017 Awards received 3250 nominations.

The second round is the short listing process by a panel made up from the jazz constituency. The panel includes, promoters, musicians, journalists, the media, people from jazz education and managers

The awards ceremony will take place on Tuesday 16 October at PizzaExpress Live (Holborn).

Jazz Venue of the Year (including jazz clubs, venues, festivals and promoters)

Jazz Newcomer of the Year (UK-based artist, musician or group with a debut album released in 2017)

Services to Jazz Award (to a living person for their outstanding contribution to jazz in the UK).

The awards are organised by the All Party Parliamentary Jazz Appreciation Group (APPJAG), co-chaired by Kelvin Hopkins MP and Lord Colwyn, and supported by PizzaExpress Live.

Here is the link to vote - https://www.pizzaexpresslive.com/parliamentary-jazz-awards

Posted by Steve Crocker at 18:03 No comments: 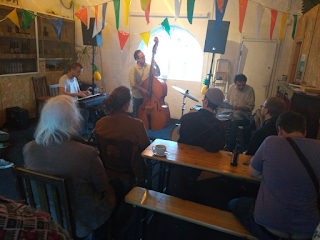 The Hyde Park Jazz club in Leeds has had its final session tonight oganised by Alecks Podraza (pictured on keys) with James Banner (bass) and Jordan Dinsdale (drums). The club has been part of the ever changing jazz scene in Leeds for the past three years, programming a varied selection of Leeds and national based bands as well as running a weekly jam session on Thursdays.

A big thanks to Alecks for all his hard work and all success with new ventures in the future. Lets hope someone else can keep it going!

Posted by Steve Crocker at 17:52 No comments: