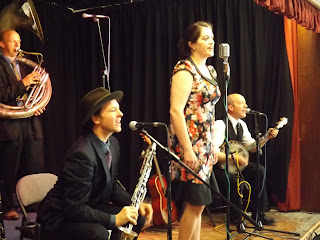 It will be a real delight to welcome back Tom Langham’s Hot Fingers with Emily Campbell back to Dove Jazz Club on the 19th May for the first of their two Gigs at the Club this year.

It was in 2007 that the musically accomplished, Buxton born Tom Langham first brought a band bearing the name of ‘Hot Fingers’ to Dove’s Village Hall. The other two musicians who accompanied Tom on that trip were Dany Blythe and Malcolm Stead who remain with him today. It was not until 2015 that the noted ‘Cotswold Nightingale,’ Emily Campbell joined the ranks of these three long standing chums. It was beneficial for these three lads to be introduced to someone from a more sophisticated and rural up market environment that aptly reflected their chosen residences in the heart of the Cotswolds.

It was Tom’s grandfather who inspired him to start playing the ukulele at an early age when his fingers became large enough and fit for purpose. He picked up the guitar, banjo and vocal skills very early on in his eventful musical journey along life’s highway. He can now proudly boast to be one of only a miniscule number of today’s performers of a similar ilk who have so deeply absorbed the panache of those early crooning pioneers such as Al Bowly and Bing Crossby. Malcolm Sked for his sins was a schoolboy euphonium player who joined the local brass band at the age of 13. He joined the Charleston Chasers at the age of 16, where he very soon came under the influence of an equally youthful Spats, for a 15 year stint on tuba and later on sousaphone. Of course Danny Blythe the other multi instrument proficient musician in this esteemed group has risen from humble beginnings as an Acupuncturist in leafy Cheltenham to join his good friend Tom on the front line of this unique musical troupe.

The same line-up will be making a return visit to us on the 17th November to provide further musical treats for the discerning ears of the Dove audience.