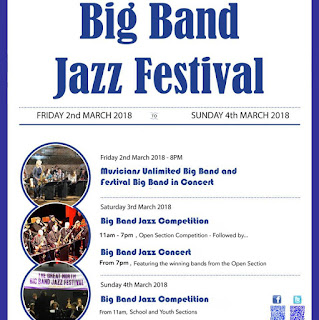 Lots of variety throughout the north east region during March with the biggest event by far kick-starting matters at the beginning of the month in Chester le Street. For the second consecutive year the Great North Big Band Jazz Festival will be staged at Park View Community Centre. A three day competition big band festival (March 2-4), bands travel from across northern England and further afield in the hope of getting the nod from the festival’s adjudicators. Thirty bands will take part in schools, youth and senior sections with the standard incredibly high and, it appears, getting better year on year. Countless young, talented musicians have taken part over the years and many of them have gone on to study jazz at prestigious music conservatoires in Britain and America. This year’s renewal – GNBBJF is in its fifteenth year – promises to be just as good as previous editions, it really is a highlight of the jazz year.

At the opposite end of the month Alan Barnes and Dave Newton undertake the first two gigs of their four-date tour of rural venues. March 29 sees the duo out in the wilds of Weardale to play Stanhope’s St Thomas’ Church Hall followed by Wingates Village Institute (Mar 30) which is in Northumberland between Morpeth and Rothbury. If the cold snap has abated these venues are well worth checking out.

In between times there is much else to hear. Regionally based pianists and a Hammond organ specialist are out and about. Two of them vie for your jazz pound on the first of the month. Alan Glen, doyen of other piano players, plays the Jazz Co-op’s Globe public house HQ with bassist John Pope and drummer Paul Wight. Meanwhile, down the road at Durham’s Empty Shop, Stu Collingwood will be working with Tyneside’s Empress of the Blues, Mo Scott, in trio format with Russ Morgan, drums. Hammond maestro Gerry Richardson’s Trio plays a lunchtime concert at Durham’s Gala (Mar 9th). It’s already a sellout, so, check at the box office on the day for returns.
Teesside-based pianist James Harrison plays a lunchtime trio engagement at Newcastle’s Lit & Phil, March 16, and on the evening Tyneside-based pianist Paul Edis takes his sextet down to Opus 4 Jazz Club in Darlington.

One final event to mention. Pete Tanton’s Riviera Quartet plays an album launch gig on March 15 at the Jazz Café. The band’s CD has been reviewed elsewhere in the jazz blogosphere, suffice to say, this is one gig that can’t fail.