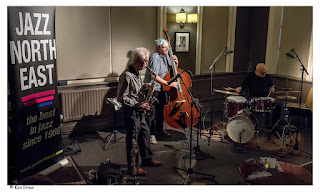 "What, only three? I’m not sure how many gigs I attended across the year, and, being averse to nostalgic rumination, I’m certainly not going to dig through my diary, but when you include double and triple bills I reckon I must have seen in the region of 70 bands, a high proportion of them completely new to me (at least in live performance). It’s an encouraging comment on the thriving state - creatively, if not commercially - of today’s jazz scene that very few of them were complete duds, and most in fact delivered a high quota of excitement. So a ‘best of’ contribution could almost consist of a long unannotated list with the message “Perm any three from 70”.

But, being of an obliging nature, I have followed instructions, and pulled three from the bag of goodies, rather in the way that raffle tickets get chosen at Jazz North East gigs (and almost as serendipitously) . . .

* Going Dutch : this all-day event kicked off Jazz North East’s 2017 programme with nine outstanding musicians from the Netherlands and two from the UK, mixed and matched in a dozen shortish sets that alternated between established groups and new, ad hoc combinations, with approaches that ranged from immensely subtle chamber music to paint-stripping ferocity. What was particularly intriguing and rewarding was to experience the ways in which the new generation of young Dutch improvisers has found its own voice while retaining the tradition of mixing freedom and fun established by their predecessors. A fine antidote to Brexit.

* Newcastle Festival of Jazz & Improvised Music : an extraordinary achievement from my friend and colleague Wesley Stephenson, who in the space of 12 months translated the idea of resurrecting the Newcastle Jazz Festival (defunct since 1995) into glorious reality. By getting all of Tyneside’s promoters and venues to collaborate, and winning Arts Council funding to bring in high profile artists, he put together a programme of eleven events, involving close to 50 local, national and international musicians. The cowardly populism that blights all too many of today’s jazz festivals was avoided - indeed, several of the sessions were pretty challenging - but that didn’t have an adverse effect on audience numbers, with ‘House Full’ notices required even for uncompromising improv. A triumphant initiative that I certainly hope will now become a regular part of the calendar.

* Biscoe, Pope & Turner : I heard many superb free jazz & improv gigs over the year, some with such internationally acclaimed artists as Ingrid Laubrock (her wonderful ‘Sleepthief’ trio) and Evan Parker - teamed up with Mat Maneri and Lucian Ban. But I’ve picked out the trio of Chris Biscoe, John Pope and Roger Turner because I think it illustrates just how creatively welcoming and stimulating free music continues to be. Percussionist Turner is now one of the elder statesmen of the scene (although, like so many of his contemporaries, better appreciated overseas than here in his native country), and the more melodically inclined reedsman Biscoe is a much loved figure for his many decades of work with Mike Westbrook and others. But young bassist Pope is just beginning to attract attention outside his Tyneside base, and on the evidence of this gig is more than able to mix it with the big boys. The trio’s only previous encounter was four years ago, at which time John was clearly the junior partner, slightly overawed at finding himself in such august company - but this December reunion was indisputably a meeting of (equal) minds, and a great way to see me into 2018 with an optimistic spirit.

So there you are, just three snapshots from a tremendous year. I’m tempted to append a list of also-rans, but I’ll resist the inclination. I can look back on the whole panoply of 2017 with pleasure, but what I really enjoy is looking forward: my answer to the question “What is you favourite gig?” is invariably “The next one”!