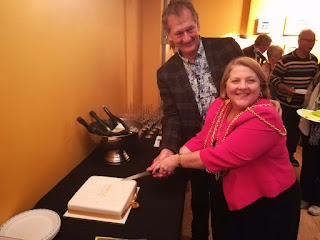 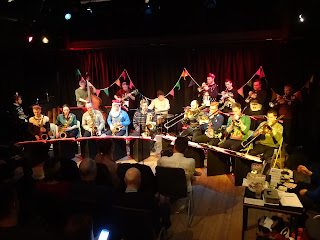 It’s 10 years since voluntary jazz promoters Seven Jazz started at Seven Arts in the Chapel Allerton suburb of the city. The special concert featured two of the young bands from the city that make Leeds the jazz capital of the North – with jazz vocalist Kate Peters and her septet and the award-winning Tom Sharp Jazz Orchestra. It was also the last concert presented by Seven Jazz and the first by the new organisation in the city JazzLeeds

Cllr Dowson announced some exciting news for 2018 – there is to be a new six day Jazzleeds festival (July 20-25th 2018) at city centre venues including the Wardrobe, the College of Music and Millennium Square and featuring jazz stars like Soweto Kinch and Greg Abate and including a jazz play about the legendary Leeds studio 20 Jazz Club of the 1950’s by Leeds author Chris Nickson and a celebration of the music of Duke Ellington marking 60 years since his famous visit to Leeds in 1958

Cllr Dowson also be announced the setting up of a new charitable organisation JazzLeeds, to support the development of jazz in the city in the future and provide a lasting legacy for the superb jazz history of Leeds.

The concert on Sunday at Seven Arts also included fundraising raffle for the Lord Mayor’s charity appeal – Candlelighters, the children’s cancer charity based in Leeds who support families facing children’s cancer across Yorkshire.

Steve Crocker, Jazz organiser JazzLeeds said
“It has been a brilliant ten years for us in Leeds with the highlight undoubtedly being named as the UK’s best jazz club in the Parliamentary Jazz award. Leeds is such a buzzing jazz city and there are great things to come from the new JazzLeeds organisation. But getting the Lord Mayor of Leeds to a jazz gig was just icing on the cake – and a very nice cake it was too!