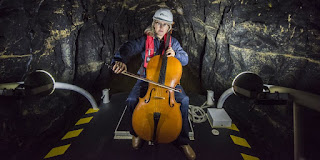 Some highlights of the Northern Jazz year from Barney Stevenson:

"Our most unusual highlight was a performance of solo improvised music in the Standedge Canal Tunnel by Norwegian cellist Maja Bugge. The Standedge tunnel is, at over 3 miles long, the longest, highest, deepest canal tunnel in Great Britain and is just a mile from the centre of Marsden. Audience members were brought into the tunnel on two electric boats while Maja performed in an adit (cross passage) between the canal tunnel and one of the disused railway tunnels running parallel to the canal tunnel. This event generated significant media interest and was featured on ITV News, on the front page of the Yorkshire Post and in the Sunday Telegraph.

We commissioned Alexander Bone and Toby Comeau to create an electronic dance music-inspired suite for sextet, which was performed as an hour long continuous piece of music at the festival and subsequently broadcast on Jazz Now on BBC Radio 3. Presenter Soweto Kinch described Marsden as “One of the UK's most adventurous jazz festivals”.

Three new partnerships:
• with the National Youth Jazz Orchestra and Musica Kirklees - delivering a two day workshop on improvisation and playing by ear with fifty participants, most of whom had never improvised before, then a joint jazz orchestra masterclass and concert with Musica Youth Jazz and NYJO at the festival
• with Be More Outdoors Forest School, creating an innovative new woodland venue, combining outdoor crafts, activities and a campfire with jazz music and storytelling led by Alan Scully (story) and Brian Acton (guitar and arranging)
• with Match&Fuse - a pan-European network of promoters, resulting in an extraordinary triple-bill gig of bands from Belgium (De Beren Gieren), UK (Skeltr) and France (CHROMB!).