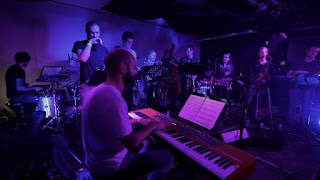 It's almost the end of 2017 and so its that time of year again where I've asked people involved in the jazz promotion in the north for their three most memorable events of the year just gone in our New Year’s Northern Jazz Honours lists. These will be posted on the Northern Jazz Live blog in the next couple of days - send yours in to me at crockersteve@ntlworld.com!.

"My 3 New Year’s Northern Jazz Honours.
Our mjf highlight this year was the Irwin Mitchell mjf originals commission: ‘Cottonopolis’, Andy Stamatakis Brown’s energetic tribute to the Madchester scene of the late ’80s and ’90s, which transformed a disused mill building in north Manchester into something of a jazz rave for the evening. I was impressed and so pleased for Andy that he pulled this off with incredible energy and dedication, honouring his affection for both the jazz tradition and the city’s dance culture, and integrating the sound and visuals of its cotton heritage so meaningfully. The 5* reviews were well-deserved.

Although there was a disappointing awareness shown of the northern sector in this year’s Jazz FM and APPJAG Awards, hats off to Mike Gordon for the acknowledgement of Scarborough Jazz Festival on the occasion of its 15th anniversary. Keeping the magic going year after year and getting the programme on sale as early as SJF do is an achievement to which we all aspire!

My third ‘honour’ is a little abstract, but there’s been a marked step change in funders having a presence in the north this year – despite what it may seem to those outside of the funded sector. Help Musicians UK and PRS Foundation hosted national conferences here, several northern partners received funding awards (Lancaster Jazz Festival, Sage Gateshead), and there was an increase in investment in arts organisations across the board in the summer NPO announcement. I think this is a positive behind-the-scenes step towards more geographical balance, so let’s mark that small achievement in the hope that it triggers further forward momentum. But there’s still, of course, a long, long way to go before there’s a genuine balance of investment in culture per head of population for all of us here in the north."