The Thing and Roller Trio at Wharf Chambers Leeds 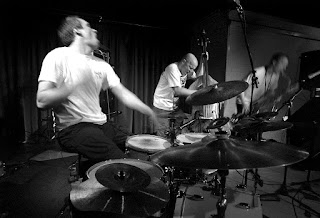 Scandinavian Jazz Punks "The Thing" are in Leeds on Tuesday 21 November at Wharf Chambers.

Since 1999 The Thing brings fans of rock, noise and jazz together. With sax, bass and drums the band has covered music from jazz avant-gardists such as Don Cherry and Albert Ayler, from garage rockers such as The White Stripes and The Cramps, more established names such as PJ Harvey and Iggy Pop and underground bands such as Lightning Bolt. The trio recorded albums together with, among others, Neneh Cherry, Ken Vandermark and Thurston Moore.

Frontman Mats Gustafsson is internationally renowned for his powerful tenor sax playing. The Swedish saxophonist/composer plays in The Thing with bassist Ingebrigt Håker Flaten and Paal Nilssen-Love, who are known as ‘Norway’s heaviest rhythm section’.

Melding German, British and American traditions of free music, their repertoire has later been collected from various sources such as James Blood Ulmer, Frank Lowe, PJ Harvey, White Stripes and Joe McPhee. McPhee was also a participating musician on the She Knows album (2001).

Other guests who have joined The Thing for recording and performances include Ken Vandermark, Otomo Yoshihide, Thurston Moore, Jim O'Rourke and Jeb Bishop.

"The Sonic Equivalent of the Hulk doing battle with Godzilla"!

‘The sheer energy and physicality of The Thing’s sound is immensely satisfying, fusing the freedom of jazz with the controlled power of rock’ (The Quietus).