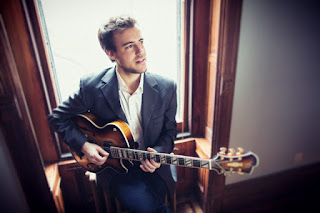 After a packed show at Wharf Chambers last year, Gilad Hekselman is back to perform his only Northern date and this time he is joined by his new trio AND saxophone powerhouse Mark Turner!

This is a rare chance to see four giants from the NYC jazz scene perform up close in an intimate setting and if last year's show is any indication, this will sell out fast.

I think Mark Turner is one of the most important players that has come along in the last 20 years, easily the most influential. He never seems to have any doubt about what hes doing.
– Ravi Coltrane

Gilad Hekselman is one of the most talented and well respected guitar players in the world today. Gilad first gained recognition after winning the 2005 Montreux jazz guitar competition. He has played, performed and recorded with artists such as Mark Turner, Jeff Ballard, Esperanza Spalding, Jeff 'Tain' Watts, Avishai Cohen and John Scofield.