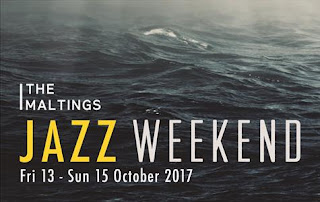 We welcome a new Northern jazz festival to the fold this coming weekend -making nineteen jazz festivals - at least- now in the north of England! It will be held at the Maltings in Berwick on Tweed in Northumberland Fri-Sun 13-15 October 2017

The Don Paterson Situation is the first event Friday evening (on Oct 13th) . Though better known as one of the UK’s leading and most decorated poets, Don Paterson has had a second career as guitarist, and moved to London in the mid-80s to join the free-improv scene, where he took lessons with the great guitar maverick Derek Bailey.  For twelve years he co-led the Celtic-jazz ensemble Lammas with saxophonist Tim Garland, playing classical and 12-string guitars and sharing stages and studios with jazz luminaries, trumpet master Kenny Wheeler, vibraphone virtuoso Joe Locke, pianist Jason Rebello and many others.
His  band, which has been described as “a Scottish-accented Pat Metheny Group” features regular collaborator Steve Hamilton (formerly of Bill Bruford’s Earthworks and currently touring with drumming legend Billy Cobham) on keyboards, along with the the current Young Scottish Jazz Musician of the Year, David Bowden.

A truly inspiring Jazz Pianist takes you on a breathtaking  journey through the entire history of Jazz piano. At 2pm on Saturday 14th October in the afternoon Geoff Eales will take you on a trip covering the sedate ragtime of Scott Joplin and on to Jelly Roll Morton, Fats Waller, Art Tatum, Oscar Peterson, Dave Brubeck, Thelonious Monk, Bill Evans, McCoy Tyner, Chick Corea and Keith Jarrett, before a fabulous finish with his own spontaneous improvisations.  “Eales has never disguised his respectful devotion to masters such as Thelonious Monk, Bill Evans, Chick Corea and Herbie Hancock and his glossy technique as a straight swinger is formidable” - The Guardian

Saturday evening has Derbyshire bassist, guitarist and jazz educator Fred Theolonious Baker with "American Dreams: The Music of Pat Metheny" The smoothest of tributes to the original Pat Metheny Group. Fred Thelonius Baker will be focussing on their early years including "American Garage" and "Offramp", playing a classic Gibson 175, an acoustic guitar and guitar synth to produce the typical sounds of the period. Fred is also conducting a masterclass in jazz guitar earlier in the day at 11.30am