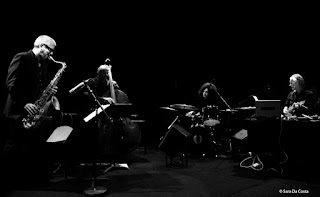 There’s fun for all the family at Hull Truck Theatre on the afternoon of Saturday 18 November, with vocalist Zoe Gilby and her Family Jazz All Stars. A fun-packed, whistle-stop tour of jazz favourites from through the ages.

And carrying on Hull Jazz Festival’s tradition of supporting emerging talent, Saturday 18 November sees a special performance featuring young players from Hull and East Riding.  A Journey with the Giants of Jazz, a new piece by Peter Edwards celebrating six giants of the jazz world born in 1917, will be performed by the Nu Civilisation Orchestra, directed by Peter Edwards. The show will start with performances of works by the six jazz giants, performed by young people from local schools.

David Porter, Director of J-Night, says: “2017’s a big year for Hull Jazz Festival, with the year-long celebrations for Hull UK City of Culture 2017 and our 25th birthday. After a string of sold out shows in July, we’re back in November with another line-up that showcases the broad range of styles that make up contemporary jazz. The jazz scene’s buzzing just now, and so’s Hull – come see for yourself!”