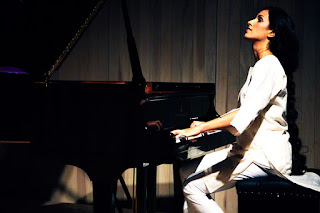 Leading UK pianist Zoe Rahman is set to head up the third edition of Band On The Wall's Jazz Directors series, with the band chosen from an open audition process to select an ensemble of emerging jazz talent. Following in the illustrious footsteps of Terence Blanchard and Chris Potter, Rahman will provide music for the ensemble that she wrote for a Guildhall School of Music and Drama project, alongside new material never previously performed live.

Commenting on the newly assembled band Zoe Rahman said, "I'm really excited to be working with such a fantastic group of musicians and I can't wait to share the stage with them. Many thanks to everyone who applied to work on this project, it was great to see such a wealth of talent out there."

They will be performing at the following northern dates and venues: More Music, Morecambe (19 Oct); Alhambra Studio, Bradford (20 Oct); Pyramid Studio, Warrington (21 Oct) and Band on the Wall, Manchester (22 Oct).