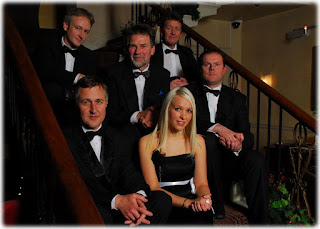 From Les and the team at Boston Spa Jazz

9th – Mike Lovell’s Six in a Bar – many requests for a return following a knockout performance last year from this group of outstanding musicians. Led by Mike on trombone, the group features Willie Entwistle of Temperance Seven fame on reeds plus Phil Lucas on trumpet and Chris Howse from the Harmony Hounds on banjo/guitar. In other words, a band bursting with talent!

16th – Eugene Farrar Band – now here’s a gathering of Northern based talent. Led by Eugene on trombone, the band includes Andy Wallace on reeds, Laura Jackson on alto and vocals, our favourite Tom Kincaid on piano plus Phil Kampen on bass and Ken Hickey on drums. We’re told the playlist will include Dixieland, small band swing and the standards.

23rd – Shades of Jazz – formerly known as Jazz Allsorts. This is the band which has taken JITS by storm. Formed and led by Graham Smith on drums, the musos include John Hallam on reeds, Gary Wood on trumpet, Martin Veasey on trombone, Jim Douglas (ex-Alex Welsh) on guitar/banjo and Bruce Rollo on bass. A star line up by any standards. Don’t miss this! £10

30th – Chicago Teddy Bears Society Jazz Band – and rounding off the month in style, none better than the “Teds” with a rip roaring session of traditional jazz favourites and fun with the added bonus of John Hallam on reeds.