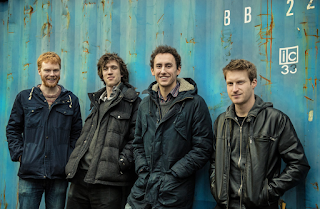 Thursday 28th Sept - The Tom Millar Quartet
Tom Millar is a London-based pianist, composer and bandleader. He was born in Sydney, Australia and grew up in London. After reading Music at King’s College, Cambridge, he studied Jazz Piano and Composition for a Masters at the Royal Academy of Music, London, and with Django Bates in Bern, Switzerland.

His debut album with his quartet,Unnatural Events, will be launched on September 20th 2017 at the Pizza Express Jazz Club, Soho, London. It is coming out on independent jazz labelSpark!, and was recorded with funding from an Emerging Excellence Award (Help Musicians UK), the Jazz Services’ Recording Support Scheme, and a successful crowdfunding campaign on Kickstarter. The quartet plays Tom’s original music, inspired by places and people that are important to him. Tracks include the soulful ballad 'Park Hill’; his setting of the proto-environmentalist poem by Gerard Manley Hopkins, 'Inversnaid'; and rock-out grooves in 'The Seafarer', 'Power Chord Thing' and 'Woad'. It features some of the most in-demand young jazz musicians in London: Misha Mullov-Abbado on bass, Alex Munk on guitar and Dave Storey on drums. Singer Alice Zawadzki features on two tracks on the album. To support the release, the quartet will be embarking on a 20-date UK tour.