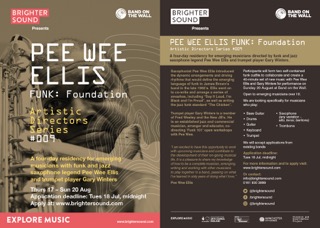 Pee Wee Ellis, the renowned architect of James Brown’s era-defining soul classics of the late ‘60s, will lead a four-day intensive funk and soul residency, with trumpet player, arranger and composer Gary Winters (Fred Wesley and the New JBs) at the Band on the Wall Manchester from Thursday 17 – Sunday 20 August. The residency is the ninth edition of the Brighter Sound Artistic Directors Series for emerging musicians.

Brighter Sound is seeking 14 emerging professionals to form two self-contained funk outfits to collaborate, create and perform a 40-minute set of new music with Pee Wee Ellis and Gary Winters at Band on the Wall on Sunday 20th August.

Pee Wee Ellis’ career spans six decades, from his collaborations with James Brown and Van Morrison to touring the world with his band The Pee Wee Ellis Assembly. Ellis introduced the dynamic arrangements and driving rhythms that would define the emerging language of funk in James Brown's band in the late 1960's. He went on to co-write and arrange a series of smashes, including "Say It Loud, I'm Black and I'm Proud" and "Mother Popcorn" as well as issuing a handful of solo singles on Brown's label King, among them "Little Green Apples" and "In the Middle." Ellis also wrote the jazz funk standard “The Chicken”.

Speaking ahead of the residency, Pee Wee Ellis said, “I am excited to have this opportunity to work with upcoming musicians and contribute to the development of their on-going musical life. It is a pleasure to share my knowledge of how to be a complete musician, arranging, writing and working with other musicians to play together in a band, passing on what I've learned in sixty years of doing what I love.”

The deadline for applications is midnight, Tuesday 18th July. Full information on the open call out and application process is available at: