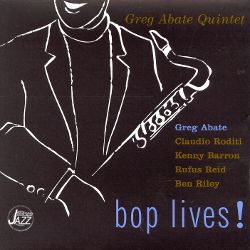 A sax player who finally emerged on records as a leader in the 1990s, Greg Abate had picked up experience playing with the Ray Charles Orchestra (starting in 1973 when he succeeded David "Fathead" Newman) and the Artie Shaw band when it was headed by clarinetist Dick Johnson during 1985-1987. Based in Rhode Island, Abate has played at many festivals and club dates, mostly on the East Coast and in Europe. Although he also plays tenor, flute, and soprano, alto is his main ax. Abate, who considers Charlie Parker, Paul Desmond, and Phil Woods to be among his most important influences, has recorded as a leader for Seaside, Candid, and Blue Chip Jazz.

Greg has ventured out as post hard bop soloist playing jazz festivals and clubs throughout North America and Europe. His recorded history covers the likes of Kenny Barron, Phil Woods, James Williams, Rufus Reid, Kenny Washington, Alan Barnes, as well a string of gigs at festivals and clubs around the world.

"... his fast-moving lines give his work a feeling of constant invention and creativity." - Howard Reich, Chicago Tribune