No rest for the wicked (yet) at Jazz North East... 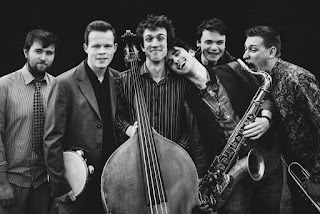 Like the majority of jazz promoters, Jazz North East take a well earned (well, that’s what they think) rest during August, but they’ve got plenty on offer in July before signing off and heading to the sun drenched beaches of South Shields.

It’s a period that sees a couple of significant collaborations, starting at the very beginning of the month (Saturday 1st) when they are programming the Jazz Stage at a festival run by Narc Magazine, with four bands headed by the newly revamped Roller Trio - with Chris Sharkey replacing Luke Wynter on guitar. Sparks are expected to fly.

Then, on Thursday 20th, it’s a co-promotion with Asian arts organisation GemArts as part of their Masala Festival. This involves Ninja Tunes drummer and producer Sarathy Korwar playing his first UK gig outside London with his quintet, showcasing his ‘Day to Day’ album that fuses traditional Indian folk music with jazz and electronics.

Between those two festival gigs, JNE dispenses a couple of its usual adventurous gigs. On Sunday 2nd they pull together South African saxophonist Ntshuks Bonga, Scottish guitarist George Burt, and Geordie bassist Andy Champion for a first time improv meeting at which just about anything could happen - and probably will. And a week later, on the 9th, two of the North’s most exciting young bands - Skeltr from Manchester and Skwid Ink from Leeds - come together in a double bill marked by the sound of genre walls being energetically demolished.

Finally, just prior to packing the bathers and the flip-flops, there’s an outing for award-winning bassist Misha Mullov-Abbado and his sextet, with a combination of complex yet catchy tunes and scorchingly imaginative solos. A great ending to a packed month.

Details of all gigs at www.jazznortheast.com