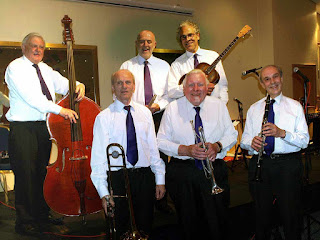 Sorry to have to report the death of bassist and bandleader Peter Franks on Saturday 13 May. Peter died from a heart attack. He will be fondly remembered as both a swinging double bass player and indomitable leader of his band the Dixieland All Stars

Peter was a classically trained musician, born in Bradford and started playing the double bass in 1956. After a lengthy stint with John Emsley’s Dixieland Band during the Trad boom, Peter joined Mal Webb’s New Orleans Band. The ‘Yorkshire Post Jazz Band’, Dennis Armstrong’s ‘Great Northern Jazz Band’ and the original ‘Yorkshire Stompers’ followed. Down the years he guested with Alex Welsh, Roy Williams, Digby Fairweather and Monty Sunshine. Peter was a former director of the Bingley Jazz Festival and he formed ‘The All Stars’ in 1996.

Six bandleaders in one band – and I have to control this lot!” he said of  his Dixieland All Stars he formed over twenty years ago. His band starred at numerous jazz festivals across England and Wales. They were voted ‘favourite band’ at a number of venues in Lancashire, Nottingham, Leicester and Yorkshire.

A lovely man and musician