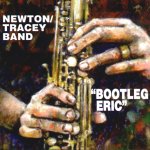 It is with sadness that we announce the death of our Bootleg Eric (Eric Parkin), on the morning of 8th May 2017, after a short illness. He attended his last gig at Wakefield Jazz last Friday, but left at the start of the interval, not knowing that he had won his last raffle prize!

"Bootleg Eric"was the name given to him by drummer Clark Tracey - he had been in charge of the sound at the club since 1988 and had a massive archive of recorded performances.

We are dedicating the 30th anniversary festival to Eric, and welcome any thoughts on how we can fully celebrate his life.