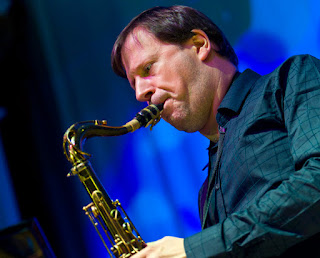 A world-class soloist, accomplished composer and formidable bandleader, saxophonist Chris Potter has emerged as a leading light of his generation. Down Beat called him “One of the most studied (and copied) saxophonists on the planet” while Jazz Times identified him as “a figure of international renown.” Jazz sax elder statesman Dave Liebman called him simply “one of the best musicians around,” a sentiment shared by the readers of Down Beat in voting him second only to tenor sax great Sonny Rollins in the magazine’s 2008 Readers Poll.

A potent improvisor and the youngest musician ever to win Denmark’s Jazzpar Prize, Potter’s impressive discography includes 15 albums as a leader and sideman appearances on over 100 albums. He was nominated for a Grammy Award for his solo work on “In Vogue,” a track from Joanne Brackeen’s 1999 album Pink Elephant Magic, and was prominently featured on Steely Dan’s Grammy-winning album from 2000, Two Against Nature. He has performed or recorded with many of the leading names in jazz, including Herbie Hancock, Dave Holland, John Scofield, the Mingus Big Band, Jim Hall, Paul Motian, Dave Douglas, Ray Brown and many others.

For this second edition in the Jazz Directors Series, Potter is performing with the Inner City Ensemble, an evolving group of the UK’s most promising emerging professional musicians, selected through an open call application process. Chris Potter has announced seven new compositions to be premièred at shows in Manchester, Warrington, Morecambe and Bradford as part of the second edition of the Jazz Directors Series this April.

The compositions, with pieces entitled ‘Come When The Nights’, ‘It Never Can Be Mine’ and ‘We Wear The Mask’, have been written and arranged specifically for the Inner City Ensemble – ten of the UK’s most exciting young jazz and crossover musicians, handpicked by Potter following an open call for participation. In addition to performing new compositions, the ensemble will perform pieces composed for Potter’s acclaimed Underground Orchestra album Imaginary Cities, released on ECM in 2015.

Using unorthodox instrumentation, this incarnation of the Inner City Ensemble will feature two bass players, string quartet, vibraphone and marimba and consists of musicians who have played in a diverse mixture of classical and jazz settings including Manchester Camerata, BBC Symphony Orchestra & National Youth Symphony and Jazz Orchestras, plus collaborations with Jasper Høiby, Elliot Galvin, Bill Laurance and BBC Young Musician Jazz Award finalist Tom Ridout. In preparation for the four dates, the ensemble will learn and rehearse new compositions for five days with Potter at Band on the Wall, starting on Sunday 9th April.

For this second edition in the Jazz Directors Series, Potter is performing with the Inner City Ensemble, an evolving group of the UK’s most promising emerging professional musicians, selected through an open call application process.

Musicians announced for the lineup are alumni of some of the UK’s finest music conservatoires including the Royal Academy of Music, Guildhall School of Music and Drama, Royal Northern College of Music amongst others. Using unorthodox instrumentation, this incarnation of the Inner City Ensemble will feature two bass players, string quartet, vibraphone and marimba:

“I’m very much looking forward to this project, both for the chance of working with a group of exceptional young English musicians and also as an opportunity to try out a batch of new music for my Underground Orchestra ensemble. Since completing my Imaginary Cities album a couple of years ago, I’ve been looking for a reason to write some more material for this group, which has a fairly unusual instrumentation. This situation gives me the opportunity to do just that, and I hope the musicians I work with will enjoy the process as much as I have conceiving and writing it.” – Chris Potter

Chris Potter and the Inner City Ensemble perform live in Manchester, Warrington, Morecambe and Bradford from 13th to 16th April and tickets for the performances are available here.