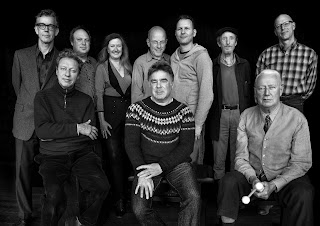 The Sage Gateshead welcomes Amsterdam’s ten-strong Instant Composers Pool Orchestra as artists in residence at Gateshead International Jazz Festival, which takes place Friday 31 March – Sunday 2 April. Celebrating their 50th anniversary the Instant Composers Pool Orchestra (ICP) will be in residence all weekend with performances, a family show, improvisation masterclass, as well as a film screening and exhibition. Although some individual members such as Han Bennink, Misha Mengelberg and Ab Baars have performed before in the North East, this is the first ever visit of this hugely significant group in European Jazz to this region,.

The Instant Composers Pool is a unique and internationally renowned collective of Dutch composer-improviser-instrumentalists formed in 1967 by Misha Mengelberg, Han Bennink and Willem Breuker. Playing ragtime to swing, bop to free jazz, classical to carnival, the group continue to be at the forefront of the creative music scene they helped create over four decades ago.

Sadly co-founder Misha Mengelberg, who appeared along with Han Bennink at the 2006 Gateshead International Jazz Festival, passed away earlier this month and the weekend will mark a celebration of his life and contribution to music. Misha and So On is a documentary which follows Misha Mengelberg during his final international tour with the ICP and will be screened on Saturday afternoon (3.30pm). A selection of images by international and Dutch photographers that document the long career of Misha Mengelberg will also be on display in the building throughout the weekend.

Ticket Office either in person or by calling 0191 443 4661 or visit sagegateshead.com/gijf