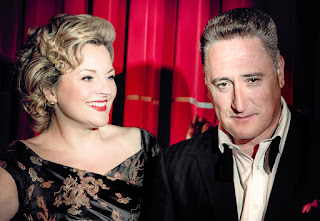 We are delighted to announce the headline acts for the 2017 festival. We will celebrate our tenth anniversary with swinging jazz from Claire Martin OBE and Ray Gelato, and powerful blues from Northern Ireland’s star, Kaz Hawkins and Mississippi native Lisa Mills.


Claire Martin and Ray Gelato - 'A Swingin' Affair'
‘Jazz Artistry’ The Observer
Join internationally renowned vocalist and BBC Radio presenter, Claire Martin OBE, and legendary saxophonist and singer, Ray Gelato, for their first show together: 'A Swingin’ Affair'. Celebrating the release of their album ‘We’ve Got a World That Swings’, described by The Observer as 'Jazz Artistry', these much celebrated and respected artists take to the stage to explore the Great American Songbook.


Kaz Hawkins
Northern Ireland's very own blues and soul darling, multi-award winning Kaz Hawkins has been compared to Etta James and Janis Joplin. Kaz, already a hugely popular blues artist in the UK and Ireland, is now wooing blues fans all over the world with her powerful, deep, soulful voice and superb original song writing. Her high-energy shows, 1950s style swing dress-meets-Dr Marten's look and ability to connect closely with her audience combine to create a unique performance that's not to be missed.

Lisa Mills
A Mississippi native, Lisa is one of the greatest singers you'll ever hear, and she's no mean guitar slinger either! With blues, country, gospel and soul influences (and adding the occasional dollop of jazz inflection) Mills takes the best of each genre in self-penned pieces and carefully chosen covers, and transforms them utterly. She is on of those rare artists that, once you've heard her, cannot possibly be mistaken for anyone else.