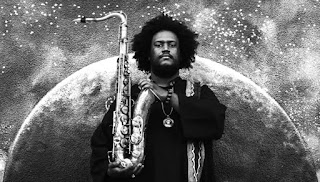 Epic’ is the one word to describe Kamasi Washington. And it isn’t only because it is the name of his 2015 album. If you don’t know what to expect, you won’t be disappointed, Washington is known for his great live shows so you will have to prepare yourself to handle the taste of Jazz turned up to 11, with a big shot of funk in it.

We can expect the gig to be completely sold out, with the tickets on sale this Friday for July the first. In fact, Kamasi Washington has already played on ‘To Pimp a Butterfly’ with Kendrick Lamar, and is part of the Flying Lotus’ Brainfeeder record label, which means that, if you attend the gig, the audience surrounding you will be a mix of Jazzers and hip hop fans.

The 8 member group constituted of two drum kits, keys, vocals, double bass, trombone, saxophone, and, his dad, so you can expect a big sound. Let’s be honest you know it’s going to be good when your dad is in your band.