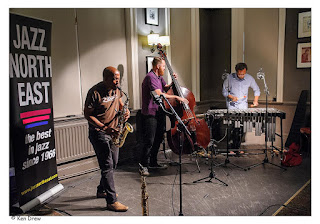 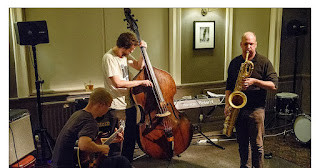 As usual, I approach the task of identifying my jazz ‘highlights’ with considerable reservations. Jazz today is so wonderfully diverse that I’m not sure there are any yardsticks by which you can measure it, let alone compare gigs that have very different approaches. And because one of the glories of jazz is that it is constantly evolving, an imaginative approach (even if it doesn’t entirely fulfil its ambitions) means as much to me as a technically flawless but creatively safe performance.

Fortunately Jazz North East’s 50th anniversary year has yielded a rich crop of performances that have surprised and delighted me in equal measure. Making a choice has been tough (and on a different day I’d probably come up with a completely different list), but here goes . . .

I’m going to start with what were the first and last of JNE’s 2016 presentations, which between them give a good idea of our schtick as promoters:

* Paris-sur-Tyne : this all-day event kicked off our year with eight French and Anglo-French bands, between them packing in a glorious variety of approaches and managing simultaneously to be distinctively French (even though there wasn’t an accordion in sight) and yet clearly drawing from the same creative well as many of the UK’s most interesting young contemporary bands.

* The Jazz North East Fluid Orchestra : a 12-piece band put together by JNE, with musicians from across the North in a decidedly unusual instrumental line-up (with theremin and viola alongside the more conventional front-line horns), and performing specially commissioned music reflecting - very loosely - the five decades of our existence. A high risk project that proved a triumphant success, with a constantly gripping mix of serpentine themes, unusual aural textures, and inspired soloing. A superb climax to our year.

In between those chronological extremes there was so much good stuff: these are just a few . . .

* Ingrid Jensen Quartet : ours was the first gig in her short tour, and there were a few ‘What happens next?” moments, but there was clearly so much enjoyment and mutual respect between Ingrid and the UK trio that it was a joy to hear.

* Ray MacDonald & Günter ‘Baby’ Sommer : the Scottish saxophonist and the veteran German drummer (believed in some quarters to be my long-lost brother) played improvised music of great imaginative intensity whilst also managing to be hilariously entertaining. Unforgettable. 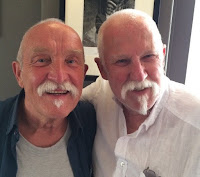 * Bonga, Champion & Mwamba : why on earth South African born saxophonist Ntshuks Bonga isn’t better known is one of those mysteries that beset jazz. Here he gave an inspired performance of free improvisation, bringing out the best in bassist Andy Champion and vibes maestro Corey Mwamba.

* Corrie Dick ‘Impossible Things’ : we were fortunate in getting the 9-piece version of the Scottish drummer’s debut CD line-up, so wonderful tunes and tremendous solos from Laura Jurd, Joe Wright, Matt Robinson - in fact from every member of a brilliant young band.

* Josh Sinton Trio : another figure little known in the UK, Brooklyn reedsman Sinton was a revelation.  In the company of guitarist Han-earl Park and bassist Dom Lash, he unleashed sinuously flowing lines which were freely improvised but always with a profound melodic underpinning. Instant composition at its best.