Highlights of the Northern jazz year! 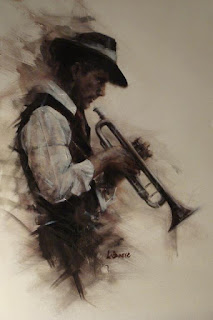 The real new years honours list didn't, as usual didn't do much for jazz, so for the third year running we've done our own! The North of England is the best place to see jazz in the UK, second only to London in the quality variety of jazz being played, composed and recorded so we have a lot to celebrate. We've ask some Norvoljazz promoters what they remember as the highlights of 2016 for our NorvolJazz New Years honours list! So here's some of those highlights....

Gill Wide Cleethorpes Jazz Festival, Grimsby Jazz
There were two supremely memorable events for me. The first was the Cleethorpes Jazz Festival - it will be the last organised by me as I've handed it on to Charlotte Bowen, Director of Arts organisation "The Culture House". But this year all the stops were pulled out with an amazing line up of artists making it a very extraordinary weekend.

The second event follows on from this.  The Commission of a Suite  of new music, composed by Alan  Barnes and Pat McCarthy, and arranged by Alan, is outstanding, it also has the challenge of responding musically to the wonderfully evocative poetry of Josie Moon. "The Grimsby Fish Tale" uses the language of the fishing industry, its superstitions and culture The music brings together a unique combination of regional and London musicians, Alan Barnes, Dean Masser and Gilad Atzmon on saxophones, Neil Yates on trumpet, Dave Green on double bass, Pat McCarthy on guitar, Mark Nightingale on trombone and John Perry on percussion. They go into the recording studio at the end of January and will be touring it during the second half of 2017.

Chris De Saram/Wakefield Jazz:
It's been a good year for Wakefield Jazz. The outstanding highlights of the year began in February when Simon Spillett’s band was followed by John Etheridge in duo with the amazing singer Vimala Rowe.  John Law’s New Congregation provided some sophisticated listening for our 1,000th gig in April and Ingrid Jensen’s band (a NorvolJazz/Appolo tour) closed our season for the Summer in June.   The Autumn gave us two further highlights, the International quintet of The Impossible Gentlemen and the wonderful tribute to the music of Ornette Coleman led by Tony Kofi. 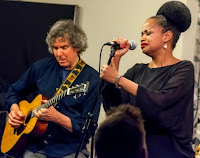 Paul Thomas/Sheffield Jazz
Here are my personal highlights of 2016:
• Benn Clatworthy Quartet in September at Crookes Social Club and (prior to that) at Scarborough Jazz Festival. Beautiful playing by the whole band and a timely reminder of just how good Benn is and what a fine, lyrical pianist John Donaldson is. A great start to our first season at Crookes too with an audience of 160!

• Kofi/Barnes Aggregation at Crucible Studio in March. Excellent interplay in a barnstorming gig.
• Vein Trio plus Greg Osby at Crookes Social Club in May. Hastily moved from Millennium Hall to Crookes due to the collapse of facilities at the former and had to be squeezed into a small room at Crookes. The small space made for a great atmosphere and Greg Osby was a revelation on sax.

Steve Crocker/Seven Jazz Leeds
2016 wasn't everyone's favourite year but we have a lot of  people to thank who have made our musical lives so enjoyable over the past twelve months! Here's my particular highlights 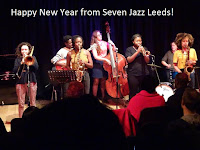 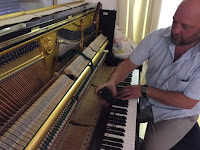 From Ian: we held the 40th Anniversary celebrations of the Wigan Youth Jazz Orchestra, the organisation that in the mid 1980s was responsible for the creation of the Wigan Jazz Club and the Wigan International Jazz Festival involving a sell out concert featuring special guest Eric Marienthal performing with WYJO and this in turn led to the release of the latest WYJO album ‘Live @ 40’.

Many of the Orchestra’s past members attended the concert, including founder members Andy Prior (below front row far left; not his political position) and Carolyn Cheetham (front row 7th from the left) Also attending the Festival to hear Georgie Fame (one of his best friends) was legendary rugby player Billy Boston pictured here with former WYJO bassist Ben Darrington.

From Mary: lots of good music this year, however the most memorable concert of my year was Friday Afternoon at Wigan Jazz Festival.  Friday afternoon is when we invite the local schools into the venue  (mostly juniors).  We booked The New York Brass Band and the kids loved them.  The teachers tried to keep them all in their seats, but didn't succeed, and the afternoon ended with hundreds of children joining the Band in a long line conga-ing round the hall.  I just hope some of them will be encouraged to learn more about Jazz! 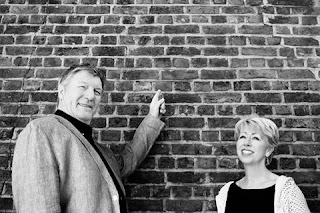 So a happy New Year from us all at the NorvolJazz network - here's to a lovely jazz year. Check out about Norvol Jazz Network here - http://www.norvoljazz.org/