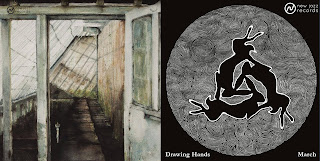 Leeds based Drawing Hands are performing some of the most interesting music in the North of England jazz scene at present. Led by composer and double-bassist Sam Jackson. They perform original music inspired by 17th century counterpoint, traditional English folk and 21st century jazz. Their new album "March" is out today on James Hamilton's New Jazz Record label.

Treppenwitz is a project dedicated to improvisation and the exploration of sounds within open structures. It was formed in January 2014 after (though not because) a Philadelphian drummer, Matthew McGraw, left the city of Leeds. The music they make can be seen as an indirect response to this. This night sees the launch of their new release, Short and Long Ditties.

New Jazz Records was formed by James Hamilton in mid 2014 to document the creative output of jazz artists around the north of England. To record, release and promote original recordings by practitioners at the beginning of their careers.