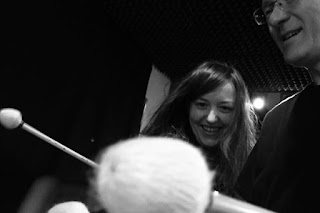 Mercury nominated and critically acclaimed folk artist Kathryn Williams has teamed up with revered jazz musician and vibraphone player Anthony Kerr, to create a complete re-imagining of classic jazz standards. The new album 'Resonator' strips away the bombast of previous versions of much loved songs such as "My Funny Valentine" and "Stormy Weather", leaving them exposed and yearning – exuding a dream-like and hypnotic luminosity.

Kathryn and Anthony have revealed true beauty in these old songs, with their fragile delivery both vocally and instrumentally; Williams' signature vocals enriched by soft, lush vibraphones, distant jazz trumpet and double bass.

The pair were introduced six years ago through composer Kate St John, and Anthony went on to play on Kathryn's first release via One Little Indian, 'The Quickening'. They came up with an idea of re-working a collection of jazz standards, and began to put the wheels in motion – meeting up to demo ideas and recreate countless versions of the songs. In Kathryn's words: "I was imagining the songs as tired horses who had been whipped by big egos and we were taking them in, taking off their saddles and setting them free in a field."

Anthony Kerr said of the record: “These songs are often presented in a ‘big’ fashion - with the drama of a large ensemble (big band or orchestra perhaps). I wanted to hear these songs in a much more vulnerable and intimate setting. The songs of Gershwin, Rodgers and Hammerstein, Jerome Kern and the like form the backbone of the jazz tradition. We 'jazzers' like to play these tunes in a wide variety of styles and settings. The melodies and harmony is so strong that an infinite variety of possibilities presents itself when considering these songs. They don’t ever seem to get old.”

Kathryn isn't new to unique collaborations. The prolific musician has previously worked and toured with John Martyn, Chris Difford (Squeeze), Bombay Bicycle Club, David Gray, Ray Lamontagne, and made two further albums as a member of bands The Crayonettes and The Pond. However, she says that Anthony's knowledge of jazz is boundless in comparison to her own. Kathryn grew up listening to Ella Fitzgerald, Chet Baker and Charlie Byrd, although she wouldn’t claim to be an aficionado of the genre. And this only serves to make these re-imagined songs more interesting than they ever could have been had we heard two masters of jazz re-write and perform them. Kathryn brings elegance and vulnerability to the record, searching for the heart of every song and laying it bare.