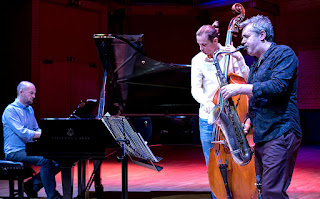 Wakefield Jazz kicks off its new season on 7th October with the drum-free trio Malija – contemporary jazz from three of the UK’s most accomplished exponents; Mark, Liam and Jasper (get it?).    Expect the unexpected from them.

The ever-entertaining Sottish Brass Jaw follow on 21st with a trombone interposing itself among the saxes.  This third iteration of the band still features the star players Paul Towndrow and Konrad Wisiewski (band leaders themselves).

The month ends with a coup – the expanded Impossible Gentlemen, now including Iain Dixon, return from Italy to play Wakefield.   This gig was postponed from a previous date after Gwilym was invited to tour with Pat Metheny and we congratulate him on this furtherance of his international reputation.    Excited ?    We are !