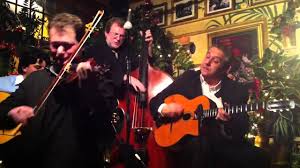 Three jazz venues now in Southport - and you'll be seeing a lot of Parisian jazz violinist Daniel John Martin this month- he's playing at all of them! The first time is Jazz at Dobbies Garden Centre in Southport which has become an established jazz venue now. Daniel John Martin with his hot club trio reminiscent of the Hot Club of France is there on October 29th. The music runs 6-8pm and ticket prices are £12.95 per person including afternoon tea. October's gig on October 27th features jazz vocalist SuEyo with Anthony Ormesher on guitar

Meanwhile Southport Melodic Jazz continue their Monthly programme at the Royal Clifton Hotel on Sunday October 2nd with a "Jazz Day" - a second appearance of  Daniel John Martin's trio at 2pm, then the fantastic duo of vocalist Tina May and pianist Enrico Pieranunzi reprising their new album "Home is where the heart is" at 8pm

Daniel John Martin appears again at a third azz venue in Southport- Boulevard West on Lord Street - is going well on the first Monday in each month. He's there on 3 October with his trio and then they have a guitar duo of Vernon Fuller and Willy Fluss with their mix of jazz, soul and reggae (7 November)