Head Hunters at the Brudnell 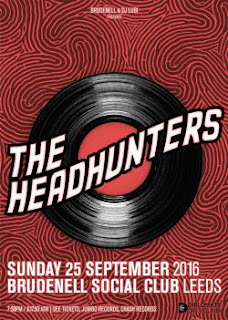 The album Head Hunters, recorded with the one and only Herbie Hancock, has remained a cornerstone for not just jazz fusion but jazz as a whole since its release in 1973. Put simply, their influence on the jazz world as we know it today cannot be underestimated - they are bonafide legends of the game and it's a privilege to welcome them to our stage. Located at the infectious crossroads of funk and jazz is the internationally acclaimed band The Headhunters. Forty years in the industry has melded their sound into an energetic ride through the roots of music in the beats of ancient percussion instruments to the electronic vibrations of the future.

The band has influenced the sound of acid-jazz and such musicians as Grammy-Award winning artists, Esperanza Spalding and Troy “Trombone Shorty” Andrews. Their songs have been sampled by artists around the Globe including Usher, Prince, Nas, The Roots, Madonna, and many more. Under the direction of co-leaders Bill Summers (percussion/vocals) and Mike Clark (drums), the band toured and recorded for several years with legendary pianist Herbie Hancock.

Their debut album titled Head Hunters (1973), is one of the best-selling jazz/fusion records of all time, the first jazz album to reach platinum status.In 2003, the album was ranked number 498 in Rolling Stone magazine’s book on the 500 greatest albums of all time. Fasten your seat belt for the ride that is...The Headhunters.