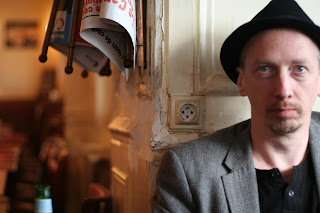 Hailed as being at the forefront of the global creative improvised music scene for the past 30 years, New York saxophonist Ellery Eskelin is preparing to perform a number of gigs in the North of England in October 2016, including a performance at Seven Arts in Leeds on October 13th.

Eskelin is the second featured artist to take part in the Orpheus Project, an ambitious programme set up by jazz venues across the North of England in partnership with Apollo Jazz Network to bring internationally renowned artists to intimate venues in the region and expose audiences to extraordinary live jazz. Joining Eskelin will be guitarist Chris Sharkey and pianist Matt Bourne.

We couldn't be more excited about Ellery's tour. It provides a rare chance to see a world renowned musician in small, intimate venues and really experience this music close up. Leeds has a rich history of hosting cutting edge international jazz and we're so pleased that Seven Jazz and Fusebox are teaming up to host this wonderful band

Based in New York City, Eskelin has traveled widely performing, recording and amassing a very personal and iconoclastic body of work. And yet he has always remained deeply committed to the traditions of jazz and American music. Eskelin embodies this seeming contradiction with ease. He does not see jazz as a style or idiom but as a process. Further, a process of creative development that has great relevancy to our time. In this pursuit Eskelin consistently delivers to the listening public unadulterated, passionate music with no excuses and no apologies.

Chris Sharkey is known across Europe as being at the cutting edge of creative music. He has been a member of numerous groundbreaking groups in the UK –including TrioVD, Acoustic Ladyland and Bilbao Syndrome. Internationally, he has collaborated with musicians in France (Christian Sebille), Norway (Nils Henrik Aarsheim) , Lithuania (Liudas Mockūnas) and Spain (Asociación Musica  Libre).

Matt Bourne first came to national attention as a winner of the Perrier Jazz Award in 2001, which was followed by an award for innovation at the BBC Radio Jazz Awards in 2002, and the International Jazz Festivals Organisation’s International Jazz Award in 2005. Renowned for his intensely personal and sometimes confrontational solo work, Bourne’s uncanny ability to balance delicacy and virtuosity, while establishing a close affinity with his audience, have become hallmarks of his concert performances.